When the market falls as it has done lately, savvy investors with cash look at their buy lists. A favorite for long-term investors, especially those seeking income, is often Walmart (NYSE:WMT) stock. 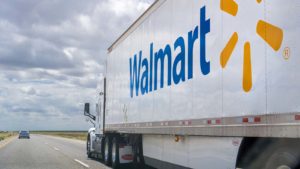 They ask, “Is Walmart cheap yet?”

It’s certainly cheaper right now. Walmart is at $129, down 14% since November. That’s a market cap of $365 billion on what turned out to be 2020 sales of $560 billion. For a retailer, that’s high but not excessive. Only very fast-growing retailers sell for more than their sales, and a 0.6x price-sales ratio sounds fair.

But look at earnings and it’s a different story. A price-earnings ratio of 27x is high. A dividend yielding 1.7% is low. Walmart has become a substitute for bonds, and interest rates are rising.

To justify your investment Walmart must be more and do more.

Walmart is still being chased by Jaws, also known as Amazon (NASDAQ:AMZN). Amazon had sales of $386 billion last year, still well behind Walmart. But it’s growing five times faster, 38% last year against Walmart’s 7%. At this rate it might pass Walmart on sales in 2023.

Many Amazon sales are also digital media or services it costs nothing to stock on its cloud. Even with its own recent fall, Amazon’s $1.5 trillion market cap is 4x higher than WMT stock.

Walmart recently dropped its $35 minimum order on grocery delivery, which Amazon Fresh still retains. Flipkart, the Indian e-commerce company it bought into, may also come public in the U.S. through a SPAC, accelerating its growth.

Walmart is also getting a bigger boat, becoming more than a retailer. Walmart opened health centers that stock the Covid-19 vaccine.  But that effort, which once meant opening 4,000 clinics in its stores, seems to be slowing.

Walmart is also assessing its $600 million U.S. media account, currently held by Haworth. Walmart sees ads as a profit center. Its Walmart Connect program uses partners to sell ads in stores and online, is growing at what can only be called an Amazon pace.

The big story is that Walmart is getting serious about banking. Walmart experimented in the last decade with a payment card called Bluebird that was branded by American Express (NYSE:AXP). The card took deposits and could serve people without a banking relationship.

Now Walmart has hired two Goldman Sachs (NYSE:GS) bankers. Its fintech partner is Ribbit Capital, which helped fund Affirm Holdings (NASDAQ:AFRM) and Robinhood. This would go a step beyond the credit card Amazon has branded with JPMorgan Chase (NYSE:JPM). It seems aimed at companies like Square (NASDAQ:SQ), whose Cash App earned it $41 million last year and has given it a market cap of nearly $100 billion.

Speculation is running rampant because of the deep data relationship Walmart already has with its regular customers. But the competition will be intense. Walmart is not only going after banks and card processors here, but the entire fintech world.

Walmart’s growth has accelerated in the last year, to 7% from the former 3%, thanks to its expansion into new areas of business. That’s going to continue in 2021 and beyond, which is why the stock remains expensive next to other retailers.

Expansion into advertising, health, and banking also increases risk, meaning WMT stock is no longer the super-conservative stock market play it once was.

If I’m looking for income, then, I look elsewhere. Walmart must grow fast, and grow digitally, to justify its current stock price. As Amazon has become more like Walmart, Walmart is becoming more like Amazon.

Maybe Walmart should build a cloud.

At the time of publication, Dana Blankenhorn directly owned shares in AMZN. He did not hold (either directly or indirectly) hold any other positions in the securities mentioned in this article.

Dana Blankenhorn has been a financial and technology journalist since 1978. He is the author of Technology’s Big Bang: Yesterday, Today and Tomorrow with Moore’s Law, available at the Amazon Kindle store. Write him at danablankenhorn@gmail.com, tweet him at @danablankenhorn, or subscribe to his Substack https://danafblankenhorn.substack.com/.

More Fiscal Stimulus in the United States – Is It Needed?

4 Stocks Hampered by This Continued Shortage of Semiconductors