For years, Canada’s Aphria (NASDAQ:APHA) has been among the world’s biggest and best-known cannabis producers. Because of this, traders have justifiably counted on APHA stock as a reliable entry point into the world of cannabis investing. 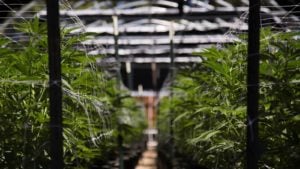 Along with the broader cannabis sector, Aphria has gone through some rough patches. The onset of the novel coronavirus undoubtedly took a heavy toll on the company, as did the disappointing rollout of Cannabis 2.0 (the Canadian introduction of derivative products like edibles and topicals).

2021 offers a fresh start and a dramatically changed government in the U.S. Indeed, there’s evidence that the tide on Capitol Hill may be turning towards a pro-cannabis government.

On top of that, there’s a merger in the works that’s stealing the headlines. We’ll cover all of these issues, but first let’s start off with a technical analysis of the price action of Aphria shares.

A Closer Look at APHA Stock

One feature that should be noted up front is that APHA stock actually has positive earnings per share. To be more precise, it’s 30 cents on a trailing 12-month basis.

Okay, so that’s not a huge number. Still, at least it’s not zero or negative like you’ll see with some other cannabis cultivator stocks.

And since the earnings per share are positive, APHA stock has a price-to-earnings ratio. On a trailing 12-month basis the stock’s P/E ratio is around 60, which isn’t super-low but isn’t outrageously high, either.

Value-focused investors might assert that the stock ran too high, too fast recently. They might have a fair point, as Aphria shares ascended from less than $5 in October to a 52-week high of $32.29 on Feb. 10.

Since then, there’s been a cooling-off period. As of Feb. 26, the Aphria share price settled at $17.84. And while the share price has rebounded toward $19, at least new shareholders can still get in at a more favorable price point.

Lifting Up the People

Ever since Bill C-45, also known as the Cannabis Act, became the law of the land in Canada in 2018, the U.S. has struggled to play catch-up in terms of cannabis legislation reform.

Investors should expect Aphria and its stakeholders to benefit greatly if and when the U.S. government finally relaxes its stance on marijuana decriminalization.

The “blue wave” in Congress and the installation of the Biden administration in the White House could clear the runway for legalization on the federal level.

Evidently, Schumer is seeking legislation “that will lift up people who were unfairly targeted in the War on Drugs.”

Schumer, in conjunction with Oregon Sen. Ron Wyden and New Jersey Sen. Cory Booker, have even expressed the intention to introduce legislation in the coming weeks.

Thus, on a macro level, it appears that a pro-legalization environment may be forming.

Yet, there’s also company-specific news that could have a ripple effect on the Canadian and even the global cannabis market.

It’s an event that’s so consequential that Aphria and Canadian cannabis rival Tilray (NASDAQ:TLRY) decided to create a full, separate website to address it.

As you might have guessed by now, I’m referring to the fact that Tilray and Aphria are “Creating the largest global cannabis company by revenue.”

On the website addressing this topic, it states that within two years of the completion of the business combination, the new company is expected to generate approximately 100 million CAD ($78 million in U.S. dollars) worth of annual pre-tax annual cost synergies.

In other words, the newly combined company will be an absolute monster among cannabis cultivators.

And if you’re concerned about your stock shares, there’s no need to worry. You’ll just have to get ready to own shares of Tilray.

After the business combination is finalized, Aphria shareholders are expected to receive 0.8381 shares of a Tilray share for each Aphria share they own.

So, if you’re a current Aphria shareholder, get ready for big changes. Fortunately, you’ll be positioned with a massive mover in the cannabis market.

There’s a lot going on with Aphria, obviously. The share price is down from its peak. This could present a prime buying opportunity.

Yet, at the same time, there’s great news as Aphria’s combining with Tilray to form a cannabis giant. Together, the combined business stands to generate huge revenues.

In addition, there may be a burgeoning pro-legalization movement on Capitol Hill. These factors, taken together, indicate that this may be the perfect time to take a position in APHA stock.

On the date of publication, David Moadel did not have (either directly or indirectly) any positions in the securities mentioned in this article.

The post Pro-Pot Politicians and a Massive Merger Should Catalyze Aphria Stock appeared first on InvestorPlace.

3 Stocks to Sell After Disappointing Earnings