Perhaps one of the more perplexing yet simultaneously intriguing wagers in the market, there’s no shortage of opinion on Carlotz (NASDAQ:LOTZ), the user-car dealership that’s threatening to disrupt the way Americans purchase secondhand vehicles. On one hand, a compelling bullish case exists based largely on the pandemic. However, economic concerns also weigh heavily on LOTZ stock. Everybody ready? Here we go.

Well before the pandemic, Americans had been looking for an alternative to the high-pressure world of used-car dealerships. Remember, Carvana (NYSE:CVNA) originally took off based on both the convenience factor and the fact that millennials generally don’t care for negotiating a car deal and all the gamesmanship that goes with it. Our own Sarah Smith lays out the case for LOTZ stock succinctly:

Beyond that, CarLotz promises to disrupt car buying and selling. For sellers, it says its used-car marketplace is the in-between option to selling a car yourself and going through a dealership. There is less hassle, and you get more money than the trade-in value. For buyers, the company sees itself as a value play. In other words, you will find cars below their retail price, helping you find something you like within your budget.

Additionally, LOTZ stock is one of the enviable investments that fundamentally benefits from the novel coronavirus outbreak. Around the middle of last year, TheWall Street Journal detailed how many New Yorkers — uncomfortable with the idea of public transportation — made the move to purchase their first car.

Now, from someone like me who lives in car-crazy California, that concept sounds absolutely nutty. However, the WSJ reminds us that prior to the crisis, the majority of households (55%) in New York City did not own a vehicle.

It’s a phenomenon that repeated across many cities whose residents daily depended on robust public transportation. But the new normal forced a new reality which cynically bodes well for LOTZ stock. Nevertheless, you want to be careful if you intend on holding shares long term.

As with so many stories regarding the investment sector, LOTZ stock is one encompassing a dichotomy. True, Covid-19 incentivized people to consider personal transportation, even in locales where it’s inconvenient to do so. And even as daily infections are declining, most Americans are unwilling to endanger themselves by being in crowded settings.

However, the economy is probably worse than you think it is. Yes, I understand that when you look at unemployment numbers, they look very encouraging from where they once were. Also valid is that recent initial jobless claims have ticked lower. So then, somebody needs to tell that to the American people.

According to the most recent data from the U.S. Bureau of Economic Analysis, the personal saving rate — which was on the mend since hitting an outrageously high 33.7% on an annualized basis in April 2020 — again hit a staggeringly high rate in January of this year.

At 20.5% annualized, the difference in magnitude between December and January is a whopping 53%. That’s unbelievable given the progress we were making. Now, with consumers obviously holding back their purchases, the consumption economy will probably suffer deflationary pressures. Unfortunately, this isn’t good for LOTZ stock, which relies on loose wallets for discretionary purchases. 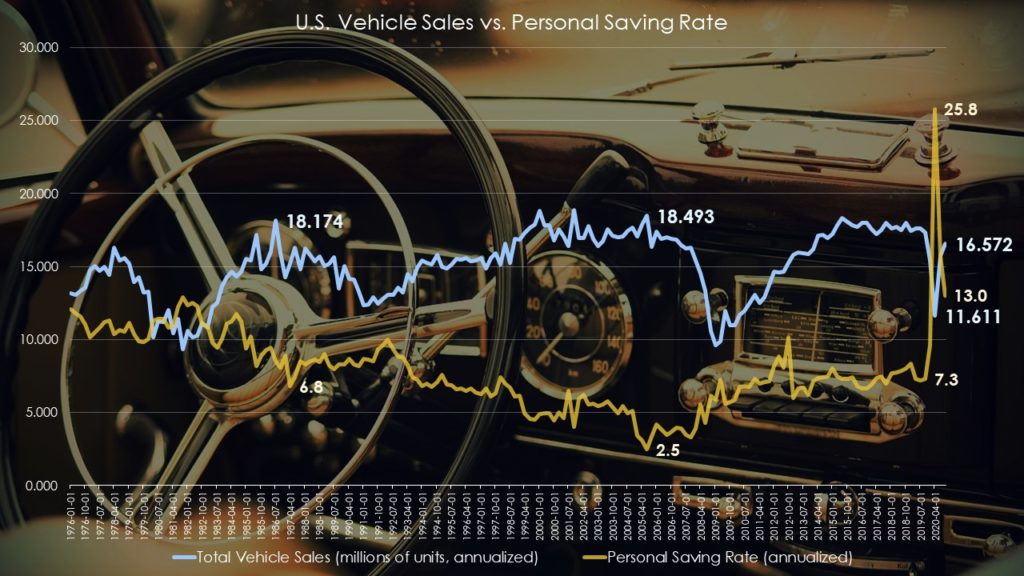 Further, if we look back in history (and by that I mean 1976), you’ll notice that the personal saving rate shares an inverse relationship with total automobile sales. Of course it does. When folks scale back their purchases, big expenses are the first to take a hit as households stretch their resources for as long as possible.

For you math nerds, the long-term correlation coefficient between the saving rate and auto sales is -51%. Though it’s not the strongest correlation, it’s within the range of statistical significance.

Why None of It Matters

Having presented the bull and bear arguments for LOTZ stock, you might be thinking that the investment proposition of CarLotz comes down to a coin toss. Well, not so fast. Smith laid out perhaps the most important point about LOTZ: it could be a Reddit play.

According to social media chatter, LOTZ could be that perfect opportunity. Posts are starting on r/WallStreetBets, although still gaining traction, outlining the investment case. One Redditor highlights the asset-light model, the benefits for buyers and sellers, and the data-driven marketplace platform. That Redditor also points out the short interest. According to Yahoo Finance, 2.46 million shares are in the float. Of those shares, 1.59 million are being sold short. With a roughly 65% short interest, CarLotz fits the Reddit stocks bill.

Having been the beneficiary of the meme stock phenomenon, I’d be hypocritical not to acknowledge the powerful potential of the internet. And Smith is right — LOTZ stock has tantalizing attributes to be the next one.

So, how should you approach CarLotz? God help me but I think there’s something here. If you’re a speculator wagering only with money you can afford to lose — and I truly mean that this is gambling — then LOTZ is a watching-through-my-fingers buy.

7 Robinhood Stocks To Buy for Your Penny Stocks Portfolio