The discussion today may get a little wonky because of the nature of cryptocurrencies. We will focus on Ethereum USD (CCC:ETH-USD) as it’s making a legit bid for the crypto limelight. It is important to make the distinction between Ethereum the open-source platform and the ETH coin. The platform uses blockchain to create and run dapps (decentralized digital applications). These enable users to digitally and directly transact without an intermediary. And then there is the coveted Ethereum the coin.

ETH prices have soared even beating out its original cousin Bitcoin (CCC:BTC-USD). I am not a perma-bull tooting the crypto horns but I definitely get it. The reactions during my debates of this concept at parties are always the same. Most people can’t believe that Bitcoin or Ethereum are real things. The instinct is to call them fake. Fake things don’t cost $48,000 per unit.

Spoiler alert, my conclusion today is that Ethereum is most definitely an investable asset. If you don’t believe me just look at the scoreboard. Each cost about$1,475 and that’s 25% off the recent high. Do you remember when Bitcoin was that low? It was only four years ago. I am not suggesting that ETH will also spike to 50k now, but it does have massive upside potential.

Why We Need Crypto

Last year, the pandemic disrupted all businesses worldwide. We need to find more efficient decentralized ways to transact so we can be ready for the next crisis. Besides, it’s clearly the better way of doing business. In addition to that, there is the tangible value appreciation opportunity.

A year ago, the stock market crashed but it quickly recovered and in a ferocious way. Even after the drubbing that stocks are taking this week, the S&P 500 is still up more than 20% in a year. But that’s not the best story to tell because Ethereum is up 540% for the same period. The concept of digital coins and blockchain puzzles most people, but they need to get over it.

The government is another reason to push crypto forward. Central bank policies are too loose and the byproduct of that is the demolition of the currency. That is why the U.S. dollar can’t find footing for so long. Money is no longer a good place to store wealth. Hiding wealth in cryptocurrencies is smart because it is out of the reach of the government. However, the line is getting finer based on this central bank digital currencies (CBDCs) news from CoinDesk about Ripple.

Critics are also eager to point out that crypto is too volatile to be a currency. It doesn’t have to be. Technology is getting to where I can carry my digital wallet and make a purchase from it in any currency. For example, the transaction on the spot liquidates a bit of Ethereum to pay in U.S. dollars.

The upside in Ethereum prices is huge. It has a lot to catch up to its Bitcoin cousin. This is a theory that is helping Bitcoin catch up to gold. Market cap matters to Wall Street experts and it’s almost like a self-fulfilling prophecy. Ethereum’s path is easier because Bitcoin forged it. Tesla (NASDAQ:TSLA) did the same thing for EVs and now the rest are trying to get in. Not all coins will succeed but Ethereum has momentum and is second only to BTC.

Ethereum is not yet as popular as Bitcoin when in fact it has outperformed it by wide margin. They now even have a futures contract to trade it. Ethereum is more than a coin because there is a process around it (dapps). This is taking the blockchain concept and expanding its uses.

A lot of people still consider it a joke when somebody invests in something like Ethereum. The joke’s on them because they missed out on 540% of upside in just one year. I don’t argue with results regardless of my personal opinion. Once investors can get over to hurdle of digital coins being fake, they can start trading them for profit. Top cryptocurrencies have been the best performing asset class by far for years.

Where There Is Reward, There Are Risks 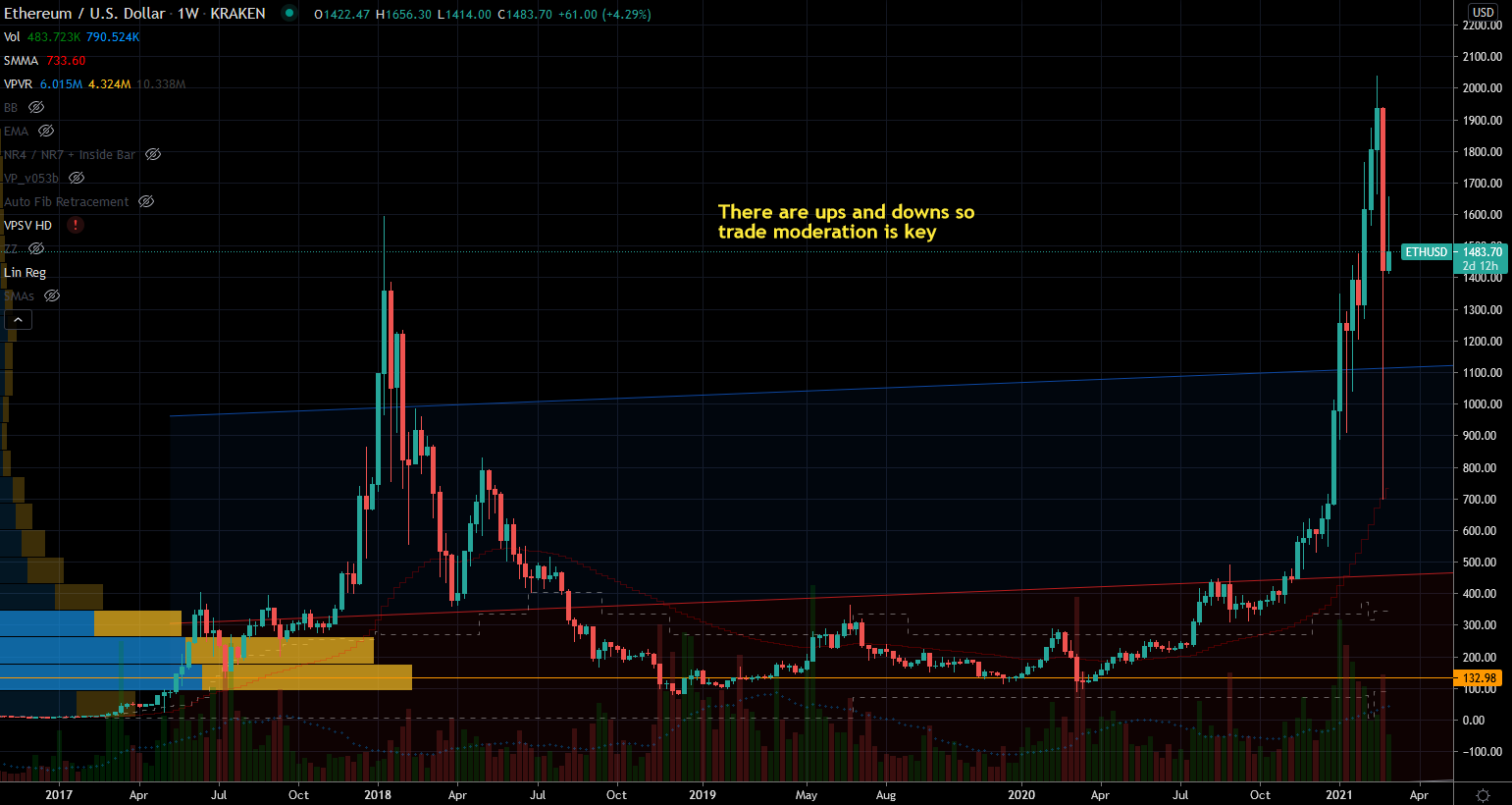 This is not to say that I should jump in will full size positions. Much like any other investment, I look for openings perhaps on bad days, and I take starter positions. This is high-tech stuff so it will change on a dime. Ethereum needs to avoid falling out of the limelight.

These are fast-moving assets so there is no way of avoiding the volatility. It is risky, and that’s why it yields a lot of reward. Everybody needs a little bit of cryptocurrencies in their portfolio. If not that then gold is the next best substitute. We don’t need to be experts on them to invest in them. The proof is in the pudding and I’m willing to keep an open mind about them.

In reality, crypto is nothing new. The concept is very similar to gold. The only reason gold has value is because we say it does. To an alien, a yellow rock is no different than a black one. People cherish gold and it’s rare, therefore it has a high price. The harder it is to get, the higher the price. That’s why Bitcoin and ETH retain values that boggle many minds. There is a finite number of these doo-hickeys and millions of people are chasing after them. The concept is that simple. It has value because enough people say it does.

So next time you want to get a rise out of someone, do what I do. Tell them that Bitcoin and Ethereum are same as gold. That’s where people’s jaws drop.

What’s more exciting about the digital coins are the processes that exist around them. Blockchain is one and it will shape our future. Credit card companies are embracing the change. That’s why Square (NYSE:SQ) and Paypal (NYSE:PYPL) are now the leaders and Visa (NYSE:V) and MasterCard (NYSE:MA) are the laggards.

Cryptocurrencies are extremely popular but they have very hardcore opponents. Even heads of banks have been overtly against it even mocking them at times. They have since changed their tone and are warming up to the concept. Goldman Sachs reopened its Bitcoin trading desk recently. They can’t ignore something that has gotten this big this fast.

On the date of publication, Nicolas Chahine did not have (either directly or indirectly) any positions in the securities mentioned in this article.

Nicolas Chahine is the managing director of SellSpreads.com.

The post Ethereum Is Chasing Stardom and It’s Worth Consideration appeared first on InvestorPlace.