Short-sellers have been salivating about the prospect of making money from an imploding Tesla stock price for years — and the vast majority of them have been burned.

As you can see below, despite short-lived pullbacks along the way, Tesla’s stock has either traded sideways or exploded higher for more than a decade. 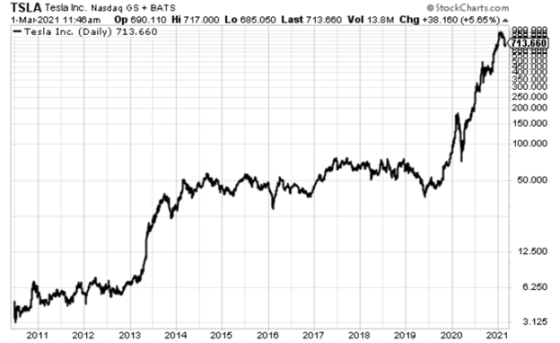 Yet, like moths to a flame, short-sellers have still been drawn to Tesla … and gotten destroyed. In 2020 alone, they lost $40 billion betting against the stock.

So, it’s hardly new to learn that a money manager has bet against the car manufacturer.

… but it is new when that money manager is our own Eric Fry.

***Clash of the titans

For newer Digest readers, Eric is our macro specialist.

He isn’t a household name like, say, Warren Buffett, but many finance industry insiders consider him to be one of the greatest stock pickers of all time.

As just one illustration, in 2016, some of the world’s best money managers and stock pickers, including Eric, participated in an annual investing contest. Leon Cooperman, David Einhorn, Bill Ackman …

The most recent came less than two weeks ago, when Eric led his Speculator subscribers to a 1,350% gain in Freeport McMoRan.

***If this bet against Tesla works out, it will be just one of many such short-bets that have been profitable for Eric

One of his most notable short-bet wins pitted Eric against Warren Buffett.

Back in February of 2019, Buffett’s Berkshire Hathaway lost more than $4 billion after Kraft Heinz (in which Berkshire is heavily invested) reported a string of bad news and plunged more than 27% in one day.

We won’t get into all the details here, but Eric had seen this collapse coming.

It was all the way back on June 30, 2017, that Eric’s analysis resulted in what now appears to be a prophetic recommendation — a put option trade, betting against Heinz.

Then there was Eric’s huge win against troubled pharmaceutical company, Teva. That time, subscribers pocketed 140% on the entire trade as Teva’s stock plummeted.

So, we have Eric — a veteran trader with a history of profitable short-sales — going head-to-head with Tesla — a market-darling that has a history of burning short-sellers.

It feels like the old paradox of the “unstoppable force” versus the “immovable object.”

It will be fascinating to see how it plays out, and we’ll be eager to keep readers up to speed. But for today, let’s look at how Eric arrived at his recommendation.

Becoming a better investor often boils down to watching how great investors size up an opportunity. So, let’s see what went into Eric’s analysis that concluded with a bet against this EV giant.

***The factors behind Tesla’s unwinding

Let’s jump straight to Eric for his broad thesis:

I am expecting a reversal of fortunes for Tesla shares over the coming months.

Eric notes that of these three factors, intensifying competition is probably the most serious.

He points out how the Volkswagen Group is already making nearly half as many battery-electric vehicles (BEVs) as Tesla. Meanwhile, it expects to surpass Tesla’s production volumes by the end of 2021.

Every major car company in the world is retooling to produce EVs, and many of these new models will be hitting showrooms for the very first time this year.

As a few examples, keep an eye out for the Ford F-150 Electric, the BMW, i4, the Cadillac Lyriq, the Jaguar XJ Electric, the Lexus UX300e, and the Mercedes-Benz EQS.

Eric sums it up simply — “Tesla no longer has the EV playground all to itself.”

It’s not just new competitors that will be a problem for Tesla. A major source of the company’s revenues is about to take a hit — regulatory credits.

During the last 12 months, Tesla booked $1.58 billion of revenue from selling environmental “regulatory credits” to other auto manufacturers. If not for that helpful windfall, the $721 million profit Tesla reported in 2020 would have been an $860 million loss.

Those revenues are going away fairly soon.

As competing auto manufacturers begin rolling out their own EV models, they will receive environmental credits of their own and no longer need to purchase them from Tesla.

It’s not just depressed revenues that could curtail Tesla’s profits — its costs are going up too.

So, what’s happening to these costs?

The prices of the main metals that make up a BEV are soaring. The chart below tells the tale. 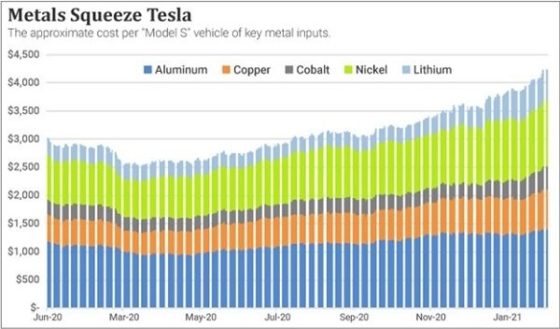 This chart, which depicts “back of the envelope” estimates of the raw metal costs of a Model S, shows that this expense has jumped from less than $2,800 one year ago to $4,300 now.

But before dismissing this rising expense as a nonevent, consider that Tesla effectively netted just $1,442 per vehicle last year … and that that net profit included regulatory credits equal to $3,160 per vehicle.

Eric points out that these reduced revenues and higher costs may not obliterate Tesla’s profit-growth trajectory, but it certainly won’t help at all:

At a minimum, these two factors could squeeze Tesla’s profit margins enough to wipe away the profit completely.

The company’s enraptured shareholders might not be prepared for that possibility.

At the same time these economic challenges have been simmering underneath Tesla’s core business, its stock price has been surging as though it’s nothing but blue skies ahead.

But this stratospheric price faces its own headwinds …

Given this, are there any reasons specific to the stock price itself that suggest the price might face trouble?

Eric believes there are.

… the “short squeeze” fuel that has also powered the stock’s gains is running low.

Because so many short sellers have waved the white flag and closed out their positions, the so-called “short interest” — i.e., the number of shares sold short — is half what it was in April 2020.

Without legions of panicky short sellers buying Tesla stock to cut their losses, the stock loses an important source of additional support.

For a second reason, Tesla’s stock also has to deal with the flip-side of multiple expansion.

For any readers less familiar with this term, Wall Street analysts use it to describe the boost a stock receives when investors award a stock with a higher and higher valuation.

Here’s how Eric is has described this in the past:

Tesla’s stock price has been the poster-child for multiple expansion.

As investors have flooded into Tesla over the past 12 months, the company’s EBITDA (earnings before interest, taxes, depreciation, and amortization) has exploded from 16 to more than 150.

Clearly, 150 EBITDA is a lavish valuation.

Based on earnings per share (EPS), Tesla’s valuation is even more of a showstopper: The stock is currently changing hands for 1,004 times earnings!

Another way to look at this earnings-per-share number is that if you were able to buy all of Tesla today, it would take you 1,004 years to recoup your investment based on Tesla’s earnings.

Sound overvalued to you?

***Regardless of how strong a short-sale case there is, Eric still sees this as a risky bet

I cannot overemphasize how risky this trade is.

Betting against Tesla isn’t simply a difficult proposition; it is an act of arrogance.

I acknowledge the apparent arrogance of making this trade. And yet, I am recommending it, humbly, because I believe it is very likely to succeed.

At this point in his analysis, Eric goes into the specifics of his recommendation. As usual, the thought-process and reasoning are fascinating. But then again, that’s what you’d expect from one of the industry’s most successful money-managers (to get the details of Eric’s preferred way to bet against Tesla as a Speculator subscriber, click here).

Wrapping up, Eric’s bet against Tesla is huge.

The EV giant has been the “short killer” for years. But Eric is one of the most disciplined, analytical investors in the industry, with a history of profitable shorts.

For investment nerds like myself, it feels like we’re about to watch Ali vs. Frazer, and I can’t wait to see how this plays out.

You can be sure we’ll keep you up to speed here in the Digest.

Have a good evening,