The latest news in the blank-check space promises to change the way we think about computers. dMY Technology III (NYSE:DMYI) announced it wants to bring quantum computing firm IonQ public. DMYI stock may be lagging today, but investors should pay attention. Here is what you should know about the IonQ SPAC merger now. 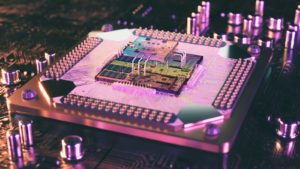 As a quick recap, dMY Technology III is the third SPAC from duo Niccolo de Masi and Harry You. IonQ, the targeted firm, considers itself a pure play on quantum computing. If the merger goes through, it would be the first publicly traded pure play.

With that in mind, here is what you should know about DMYI stock and the IonQ SPAC merger now:

So what else should you know about DMYI stock and the IonQ SPAC merger? Why should investors be paying attention to this potential deal?

Everything comes back to the potential of quantum computing. IonQ would be a first as a pure play on the fantastical tech in the public markets, and it follows growing mainstream interest. Only 1% of businesses in 2018 were budgeting for quantum projects. By 2023, that figure will be 20%. This is because of what quantum computing promises to do. Changing the way we look at and process information, experts hope to use these computers to help cure diseases and speed up financial calculations, among other things.

Right now, there is no scalable, commercial-grade quantum computer available. IonQ wants to change that, and make its devices more accessible. One way it plans to do this is to remove supercooling requirements.

So with this exciting promise, why is DMYI stock down today?

One reason could be that IonQ faces competition from tech giants Amazon, International Business Machines (NYSE:IBM) and Microsoft. Another explanation is that the Nasdaq is still suffering today. Many tech names are in the red, which could be weighing on DMYI stock.

Keep this story on your radar.

On the date of publication, Sarah Smith did not have (either directly or indirectly) any positions in the securities mentioned in this article.

Sarah Smith is a Web Content Producer with InvestorPlace.com.

The post DMYI Stock: 12 Things to Know About dMY Technology and the IonQ SPAC Merger appeared first on InvestorPlace.

As the Bubble Deflates, Churchill Capital IV Stock Will Get Interesting