Dear SOS Ltd (NYSE:SOS), let’s not mince words. It’s over between us. Last Friday, short-sellers Hindenburg and Culper Research told me that you might be a total fraud. But I gave SOS stock the benefit of the doubt. After all, their kind is wrong as often as they’re right. 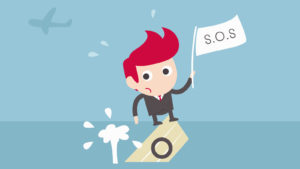 However, now a week has since passed and all you’ve sent me is a 200-word boilerplate press release. In it, you assured me you’re “preparing a more detailed response to the false innuendo and lies that are being spread.” But, honey, a 30-second cell phone video of your 10,000-plus mining rigs uploaded to Twitter (with a corresponding press release) would have made us both better off.

Now that your stock is back up again since those nasty short-sellers made their claims, I’m saying goodbye. And I’m taking my money with me for good.

SOS Stock: A Dream Made in Cryptoland

It all started so wonderfully between us. You were an unprofitable Chinese financing company, but you had big dreams of starting a Bitcoin (CCC:BTC-USD) mining operation. When you told me on Jan. 21 that you had secured 15,645 next-gen mining rigs to live that dream, I was hooked.

Over the years, I’ve known many Bitcoin miners, such as Riot Blockchain (NASDAQ:RIOT) and Marathon Digital (NASDAQ:MARA). They’ve taught everyone one thing: buying rigs during crypto-price spikes is almost impossible. Most companies have to wait four to eight months for delivery. Many even resort to acquiring entire companies to get their hands on more.

However, you seemed to have it all figured out. Your 15,645 rig purchase from HY International Group New York would have vaulted you into the big leagues in terms of mining power. At current Bitcoin prices, that would have earned about $5.5 million of revenue per month. Even at $0.05/kWh energy costs, that comes to a stunning 5.6 month return on investment (ROI).

Then, you convinced me that you had set up 10,000 of the machines within a month of ordering them. Some industry veterans might have rolled their eyes at that ridiculous speed. But not me. Maybe, because I believed that a Chinese-based company could buy Chinese-made rigs more readily than a Western miner. Or, perhaps it’s just because I wanted to think it could be true.

The U.S. Securities and Exchange Commission (SEC) has prosecuted dozens of Bitcoin-mining players with fraud. Why couldn’t SOS stock be that one Prince Charming in a sea of ugly hucksters?

Was It All a Lie?

None of the photos you sent me were real, were they? Your Feb. 23 press release of “SOS Mining Rigs” didn’t feature the T2T 37T miners or A10 Pros you claimed to have bought, but instead Avalon A1066 miners, a completely different piece of hardware. I might have overlooked the minor differences at first, but even a quick check on Amazon (NASDAQ:AMZN) shows the photos don’t match.

Even the images of your friends turned out to be fakes. The pictures of your Canadian crypto acquisition target, FXK Tech, were “lifted off a legitimate Chinese mining company called RHY.” At least you had the decency to remove the watermark before sending them. But such hijinks still border on securities fraud.

I’ve had my share of lousy Tinder dates. Some have even used 10-year-old photos to try to appear younger. But at least they were using pictures of themselves, not ones nabbed from a quick image search.

Next, there were your public filings. Of course, you were clever in covering your tracks. But even the best made-up stories have holes.

First, your headquarters at 888 Changbaishan Road should have been a dead giveaway. When I tried to drop by, all I got was a three-star hotel. A hotel! You could have used any number of law firms or shared offices. Even a phone booth at a Chinese version of WeWork would have sufficed.

I know you need your space. But just be truthful about where you are. I deserve that much if you want me to believe in SOS stock.

Now, I’m not even sure about your 15,645 mining rigs anymore. Not only did your supplier share the same address as your law firm — the tell-tale signs of a non-existent shell company — but their website now shows a 502 error. It’s as if the firm never existed.

What to Do with SOS Stock?

Maybe I’m being too harsh. After all, crypto is a young space and FUDers (fear, uncertainty and doubt) are always trying to talk me out of fascinating investments. Since last year, Bitcoin miners have risen 1,500% thanks to their abnormally high operating leverage. Confident investors who stuck to their guns have won handsomely and my own crypto portfolio has done well.

Meanwhile, the SOS stock price should keep going up as Bitcoin prices rise. In the short-term, the other investors you’ve hooked will keep bidding you up as if you genuinely have pro-league mining capacity.

I guess you can still convince me to stay, but it’s going to be way more challenging now. Some photos of your 10,000 installed miners would have been enough last week — when these rumors started spreading. But now that you’ve had a full week to prepare, I might not believe anything less than a video of your machines alongside a copy of today’s China Daily (or some other timestamped piece).

Right now, though, I’m moving on. Your valuation isn’t cheap anymore. Plus, Argo Blockchain (OTCMKTS:ARBKF) will have 1.68 exahash by Q2 2021 — three times more than you. Despite that, their $1.26 billion market capitalization is only 50% higher. So, if you want my mailing address, you’ll find me there with my rebound BFF.

Maybe the SEC will investigate you someday. Who knows what they’ll uncover, if anything at all. But until then, good luck fending off those amateur and semi-pro DIY sleuths on your heels. I’ve given you the chance to explain yourself. Now it’s time that we go our separate ways.

On the date of publication, Tom Yeung did not have (either directly or indirectly) any positions in the securities mentioned in this article.

Tom Yeung, CFA, is a registered investment advisor on a mission to bring simplicity to the world of investing.

The post Dear SOS, Iâ€™m Breaking Up With You and Your Phony Blockchain Business appeared first on InvestorPlace.