The price action in the stock market last week caused a lot of grief for investors. Not so much from the size of the correction, because it wasn’t that big, but for how sudden it was, and how it affected sentiment. For more than a year, the buyers have been in complete control with mostly positive momentum. Red candles have been rare. The indices smashed records constantly, and not only mega-cap stocks. The small caps have held their own impressive shows of strength.

Then when selling happens it roils confidence and causes sudden spike in uncertainty. The CBOE Volatility Index (VIX) spiked over 40% last week and great stocks fell precipitously. Meanwhile, nothing has changed in the fundamentals. Some experts blamed Federal Reserve Chair Powell for waffling but they are mistaken. The Fed is still in full throttle bullish mode, so it was a definite case of wrong expectations.

Dips in markets don’t necessarily change who has control going forward. Since the macroeconomic conditions remain unchanged, I bet the investors will buy this dip. Mega-caps stocks have shed a lot of recent froth so they make for great knives to catch. The government is still investing a lot of money to stimulate the economy. Trillions of dollars will hit Main Street, and Wall Street feels the effects. The trend has been ascending and my bet is that the bears don’t have the stamina to sustain the pressure.

Dozens of great stocks are back to levels that make for good mid and long investments. The pain last week seemed most sudden and deep in the Nasdaq. Therefore, I would focus my attention on the top 10 mega-cap stocks there. During tough times, I stick to the leader companies to find good deals. Banks and oil stocks out-performed, so I wouldn’t consider them today. 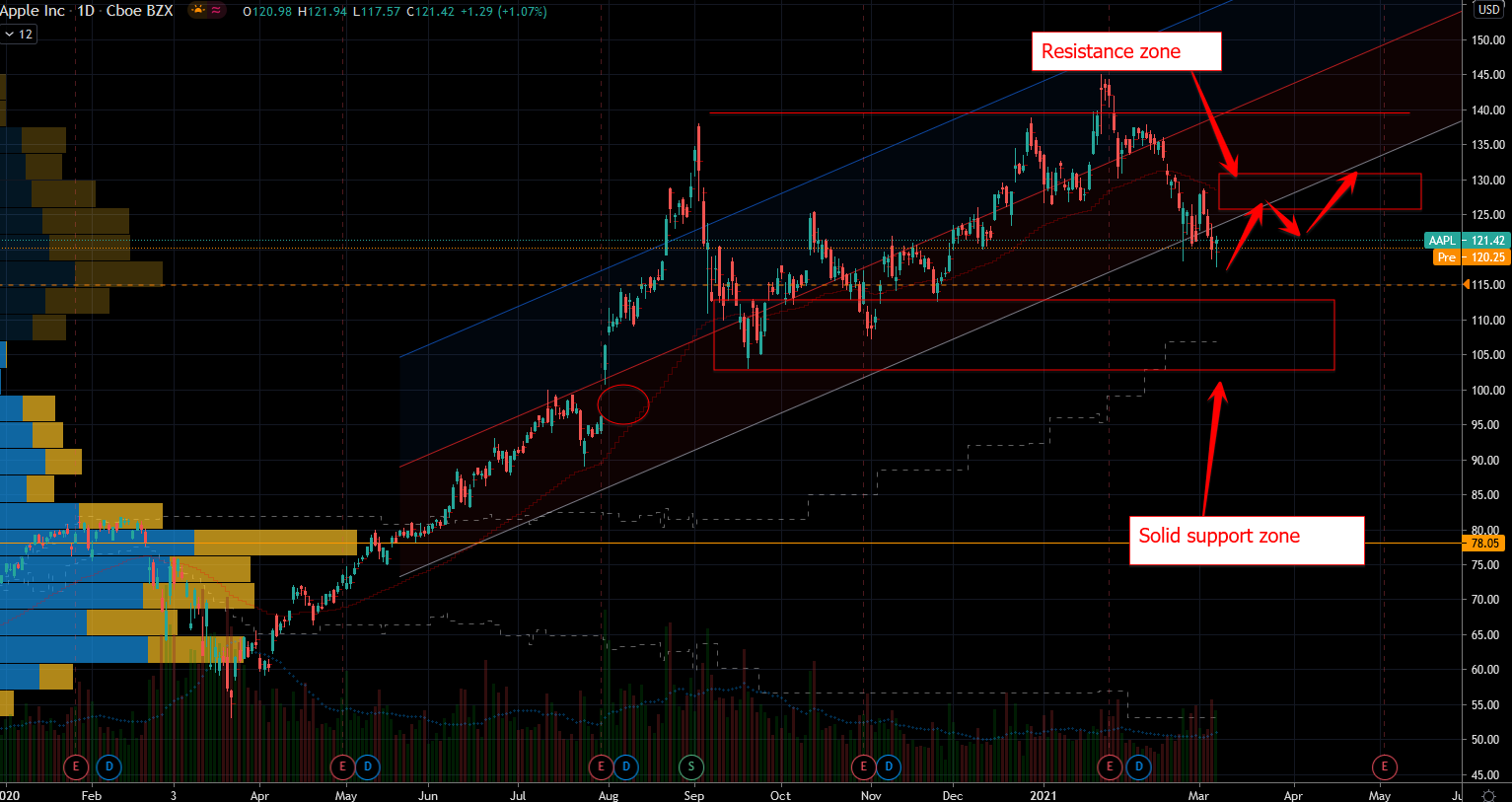 Arguably Apple is the best company on the planet. Whether that’s reality or not, perception is what counts. The balance sheet and the profit and loss statement are solid. AAPL stock is not going to suffer catastrophic losses all on its own.

Unfortunately, it is not my favorite company because of its lackluster leadership. This statement upsets many super fans but in reality I’m only complaining about the CEO. The stock is definitely worth of investment.

My beef with CEO Time Cook is that he is not utilizing the great potential within its assets. This is most definitely not a stock to short. This dip brings it into a price level that has many things going for it. Technically, there’s definite support just below last week and above $100 per share. Yes, there is a gap open down to $96 per share. It will take a major market correction for it to get there.

AAPL stock also has fundamental support because there is value within its metrics. The sales mix now has a lot of revenues from services, so it can sustain a higher price-earnings ratio, for example. It’s not dirt cheap but it’s definitely not bloated. I am very confident that owning it at last week’s lows is not going to be a financial mistake in the long run.

In hindsight, the thing to do was to sell puts on Friday’s lows. When others panic they leave the door open for opportunities for the cool calm and collected investors. 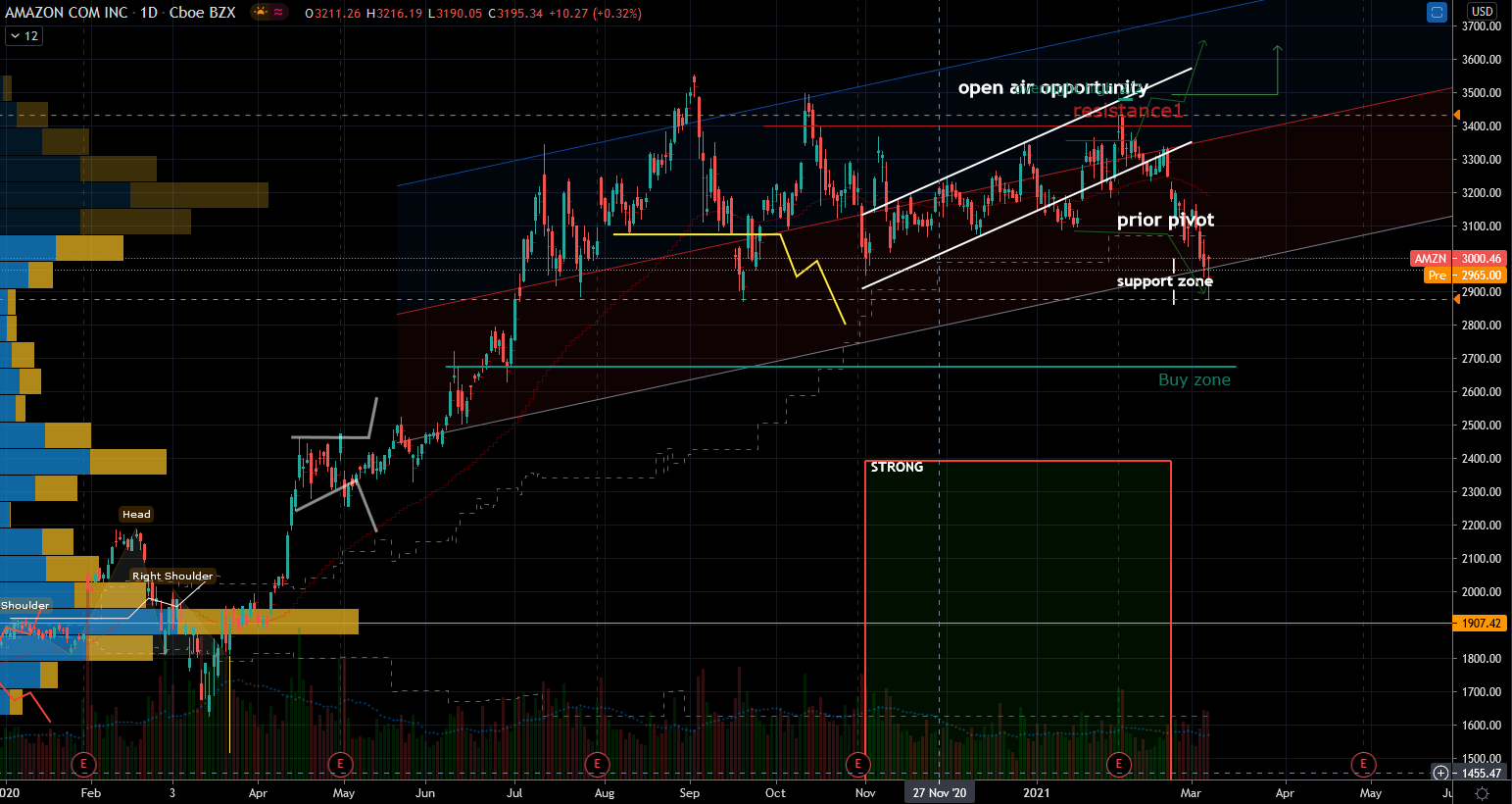 Amazon has been my personal favorite mega-cap for almost a decade. It has never stopped growing, I would even consider it still a startup company in many respects. Even after so much success, they still deliver 30% growth year after year. Yet, critics won’t quit complaining about it and they continually want them to be more profitable.

In reality given the sales growth, it is cheaper than Apple. Owners of the AMZN stock today give it only four years worth of credit in its stock price. This is twice cheaper than that of Apple even when Tim Cook’s team delivers a sliver of the growth. Between the two companies so far, I favor this one over Apple.

Amazon stock holds a high-ticket price, so it makes it scarier to catch as a falling knife. This is where I’d rather use options to soften the blow. There investor can deploy dozens of strategies to get long without the massive financial commitment. For example selling puts instead of buying shares can leave another 30% buffer.

Technically, Amazon needs to hold the lows from last week. Else they will trigger another round of selling, to bring $2,600 into view. Even then, the buyers would remain in charge of the stock action. The bears will need to do more damage and for longer periods to take control. 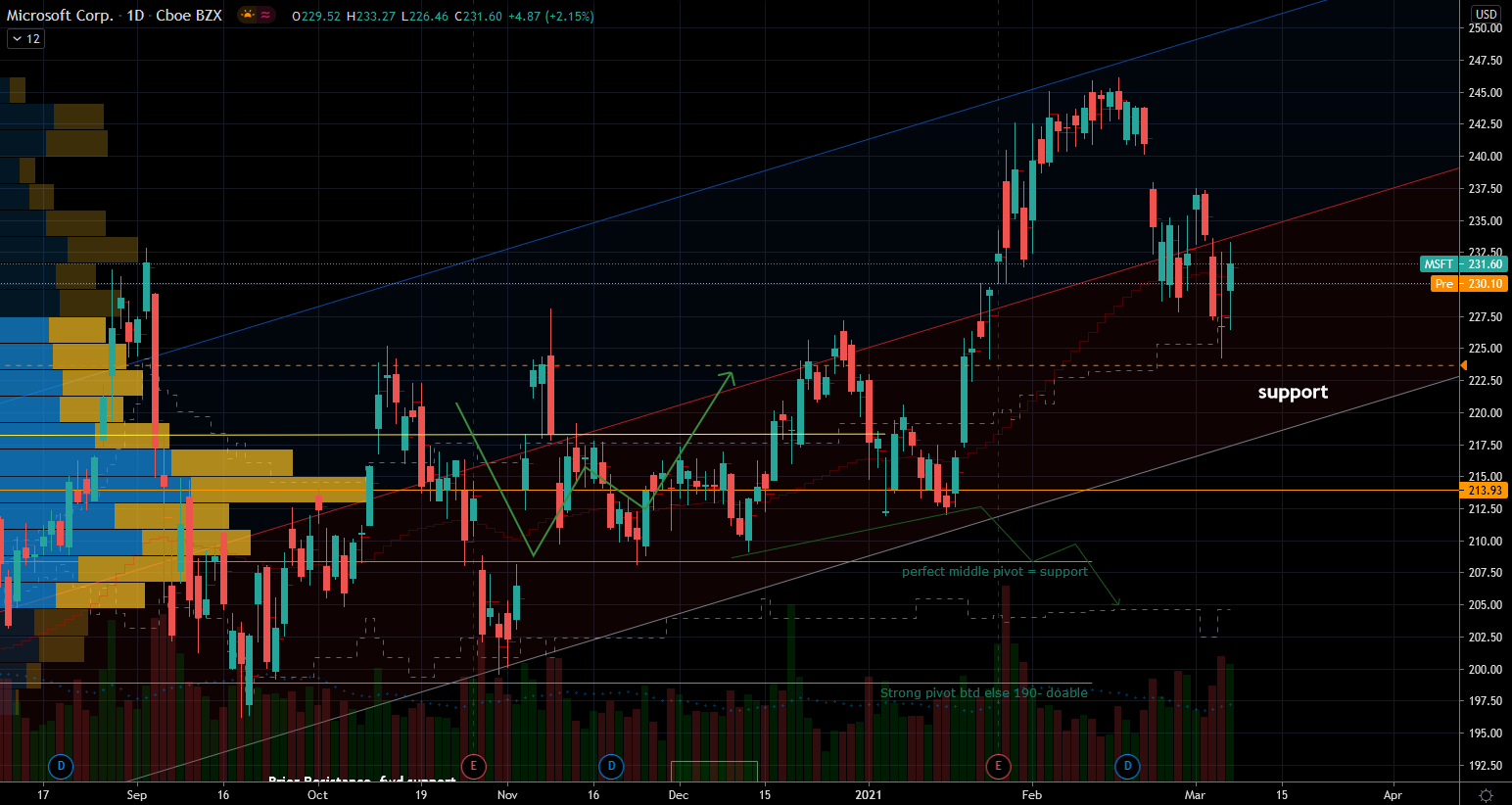 Microsoft stock has done very well, relatively speaking, of late. It held above its pivot for the last two months. Last week it showed leadership in the Nasdaq when others were falling apart. If the stock market stabilizes, MSFT stock is starting out from a shallower hole than two we covered today.

I will take this opportunity to raise the same point I did for Apple about leadership. Under CEO Steve Ballmer, Microsoft languished in mediocrity. Since Satya Nadella took over, it’s been on fire. They have completely steered the ship into the new tech world and have prospered because of it. The fundamentals are not dirt cheap, but there is enough quality in them already. It’s not cheap but definitely reasonable among its peers.

I find it easiest to catch the Apple falling knife today in spite of my low opinions of management. It is important to make the distinction between personal feelings and actual returns. I never let sentiment get in the way of a good trade.

Regardless, I would own any of these mega-cap stocks here at last week’s lows. These could bring short-term or long-term gains.

On the date of publication, Nicolas Chahine did not have (either directly or indirectly) any positions in the securities mentioned in this article.

Nicolas Chahine is the managing director of SellSpreads.com.

The post Buy the Dip In These Titans Among Mega-Cap Stocks appeared first on InvestorPlace.