In the market, stocks in a sector often trend together. When one or two names in an industry dip lower, they can pull their peers down with then. This means that, if a particular sector is weak, even the stocks of good companies may decline. And as this happens, their dividend yields go higher.

Companies pay the same dividend regardless of the price the stock is trading at. So when the price of the stock falls, the yield of the dividend increases.

The ability and choice to pay is dividends signal of a company’s strength. Paying out dividends typically means the company is operating with positive cash flow.

Paying a dividend is a choice. The company could use that money to reinvest into the business. Instead, they’re rewarding their shareholders with a dividend.

These companies haven’t always traded as penny stocks. They used to trade higher before they lost significant value in a short period of time. But they continued paying dividends to their shareholders. This may be a signal things could turn around for these names to retake the levels they used to trade at. 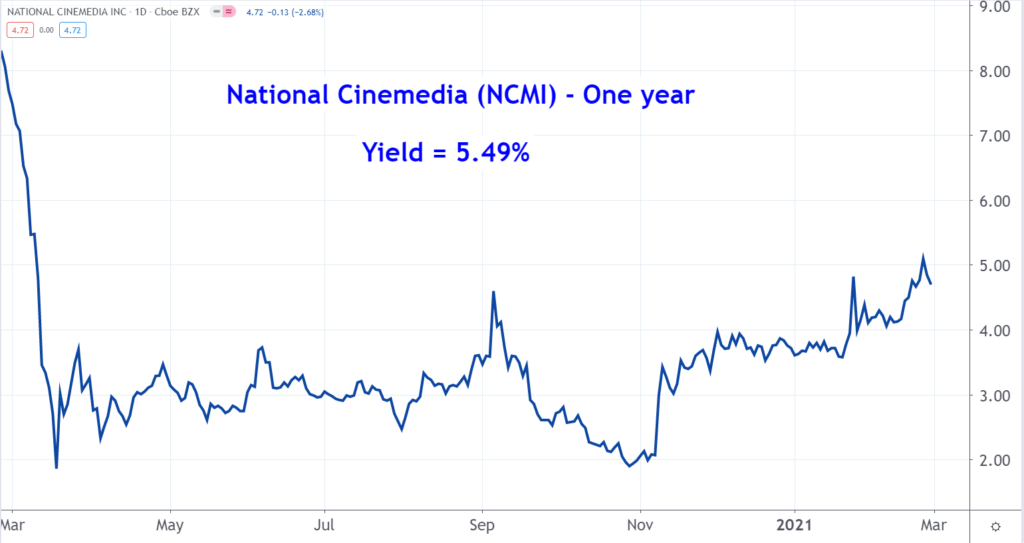 National CineMedia operates a network of about 1,600 theaters North America. The company was founded in 2005 and is based in Centennial, Colorado.

The company pays an annual dividend of 28 cents. At current share prices, that’s a yield of more than 6%.

In January 2014, NCMI reached $20. After that, it trended lower until reaching levels around $2 per share last year. The stock has since somewhat recovered, but still trades under $5.

It may not stay there much longer. Wall Street likes this company. Four of investment banks follow the stock and all have ‘buy’ ratings on it. The average of the four target prices is $6 a share. That’s about 34% higher than where the stock is currently trading. 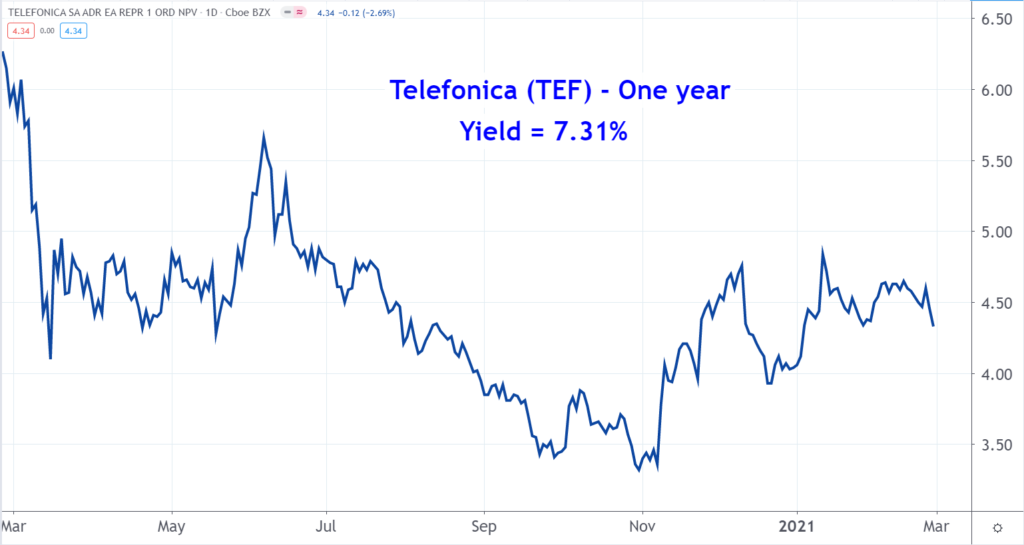 Telefonica provides fixed and mobile telecommunication services, operating in Europe and Latin America. The company was founded in 1924 and its headquarters are based in Madrid, Spain.

In November 2007 shares of TEF reached $34 a share. Since then, shareholders haven’t had much to be happy about. The stock trended gradually lower from then until this past November when it finally formed a bottom around the $3.30 level.

Since then shares have recovered and trended higher. As you can see on the chart, TEF is currently trading around $4.50.

Investors seeking yield or income may want to considered TEF. At its current price level, the annual dividend of 33.6 cents is a yield of 7.5%.

The Street is neutral on Telefonica. Three firms cover it and provide research. The consensus rating among them is a ‘hold’. The average target price is $4.71.  This is about 5% higher than current levels. 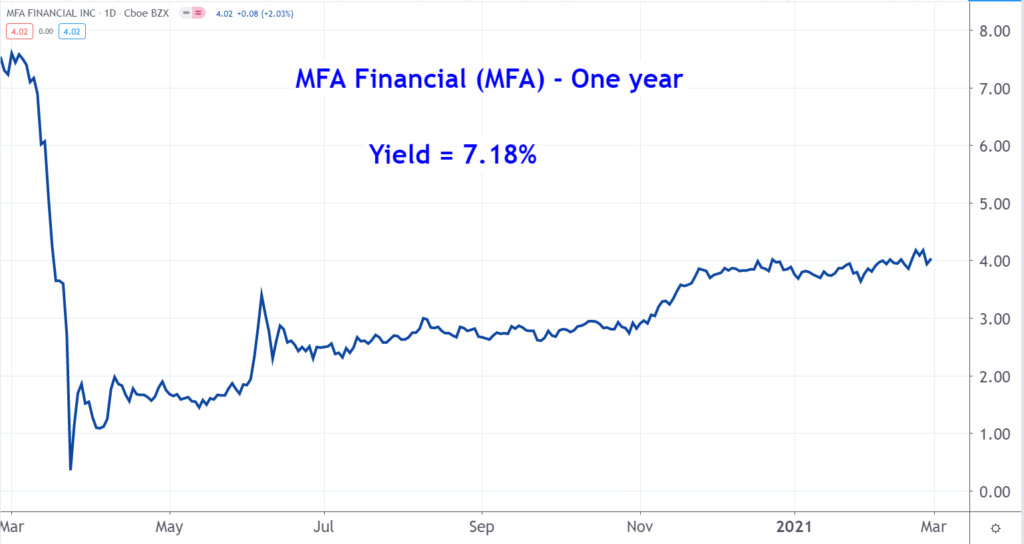 As you can see on the above chart, during the broad market selloff last March shares of MFA broke below the one dollar level and became a literal penny stock. But since then they have come back. After trending higher since then, they now trading around the $4 level.

But even with the rally, the shares still have an impressive dividend yield.  It pays 30 cents annually. At the current price level that works out to be a yield around 7.2%.

Only two firms follow MFA and both have a ‘buy’ rating on the stock, with an average target price of $4.13. That is in line with where the shares are currently trading.

Global Self Storage (SELF) 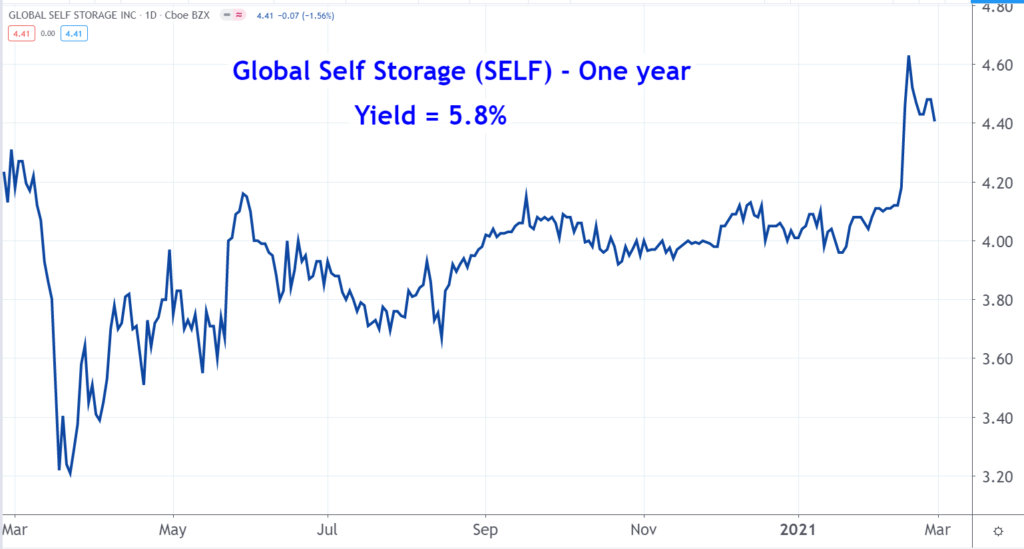 As you can see on the above chart, like most of the rest of the market the price of shares collapse during the COVID-19 selloff last March. In a matter of days it lost over 20% when it fell from $4.25 to $3.25. Since then shares have rallied and have exceeded the levels it traded at before the selloff.

However, even after the rally the company pays an attractive dividend. The annual payment of 26 cents a shares gives the stock an attractive yield of 5.78%. The chances of success for Global Self Storage probably exceed the prospects of similar companies that don’t pay one. 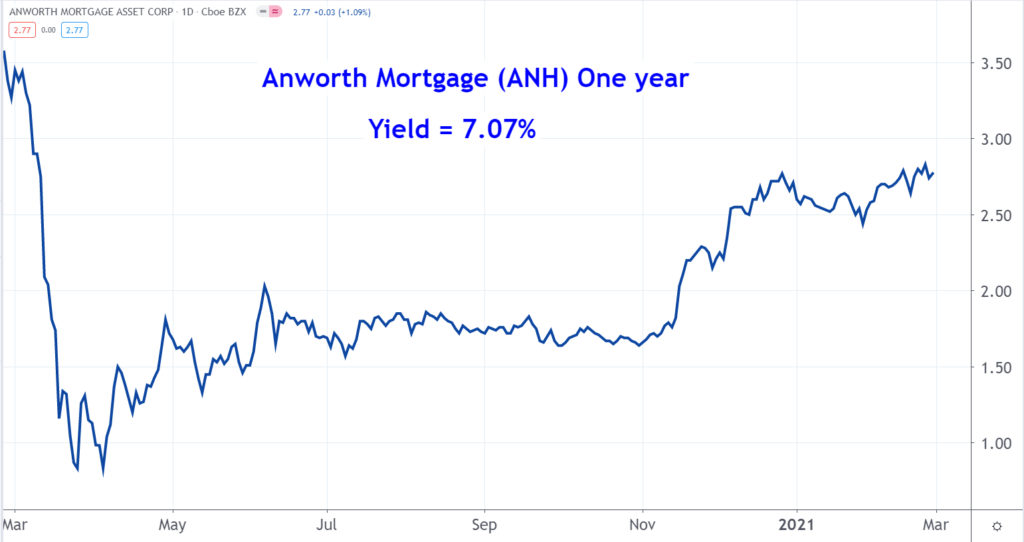 Anworth Mortgage Asset Corporation is a real estate investment trust (REIT). It manages a leveraged portfolio of residential mortgage-backed securities and loans that are guaranteed by government-sponsored enterprises. These include the Federal National Mortgage Association (OTCMKTS:FNMA) or the Federal Home Loan Mortgage Corporation (OTCMKTS:FMCC). It was founded in 1997 and is headquartered in Santa Monica, California.

As you can see on the chart above, last spring Anworth became a literal penny stock when it broke and traded below the one dollar level. During the COVID crash panicked investors sold their shares regardless of the price.

The investors who were buyers were the ones who made the right decision. Now the stock is trading around the $2.92 level.

But despite the rally, Anworth still pays a nice dividend. The annual payment of 20 cents a share is a yield of about 6.8% at current levels. 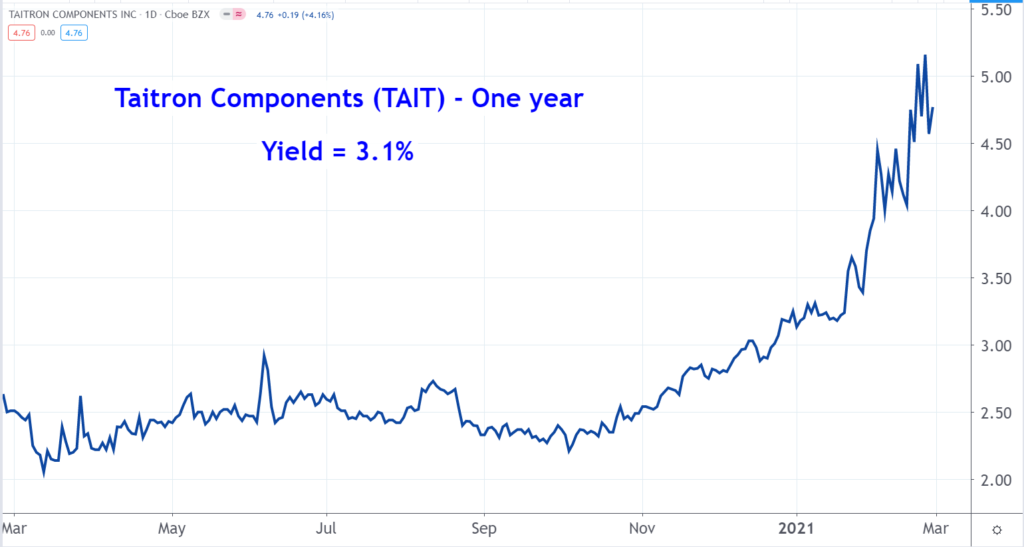 Taitron Components supplies and distributes original designed and manufactured (ODM) electronic components. They include products like transistors and analog switches. Founded in 1989, the company’s headquarters are located in Valencia, California.

As you can see on the chart above, since November shares of TAIT have participated in the recent penny stock rally. They have doubled. They have rallied from levels around $2.50 to current levels just below $5.

But even with this rallied, the company still pays an attractive dividend. The annual payment of 13 cents a shares works out to be a yield of 2.7%.

This company isn’t followed by Wall Street. There are no firms to follow the company and produce research for investors.

Some shareholders think this is a good thing. It the Street starts to follow the stock, institutional investors may get involved and invest in it. That could drive the share price substantially higher. 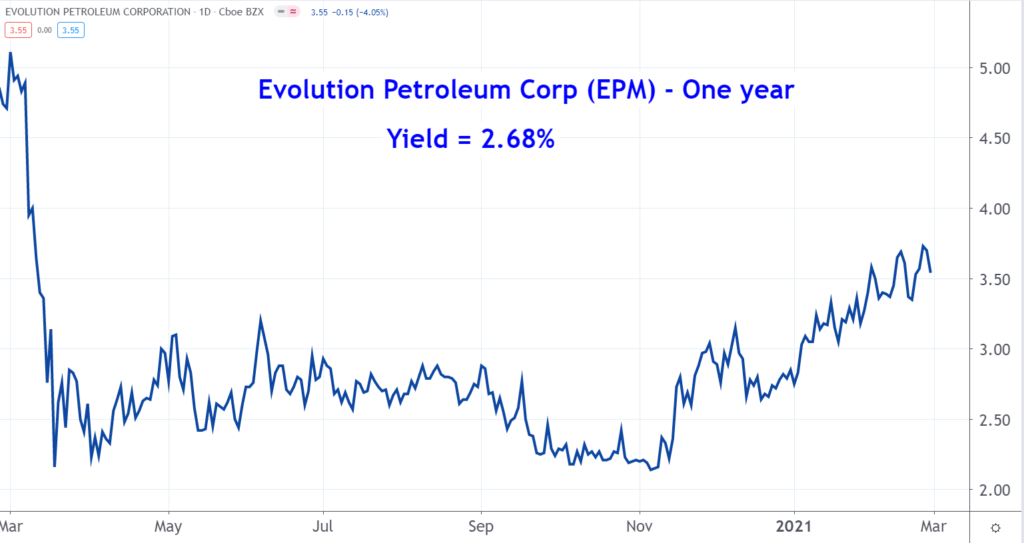 Evolution Petroleum Corporation is an oil and gas company. It develops, owns and manages oil and gas properties in the United States.  The company was founded in 2003 and is based in Houston, Texas.

Like many other companies in this sector, shares of Evolution have been beaten up. In October 2018, they reached levels around the $12.50 level. Back then, oil was trading around $74 per barrel. But it trended lower until early November.  The equities in this sector followed it. This happens because the lower the price of oil, the less profitable the oil companies will be.

In early November, oil was trading around $36 a barrel. Since then it has trended higher and currently trades around $61 a barrel.

As you can see on the chart, EPM started to rally at the same time. After reaching levels around $2.25, they are currently trading around $3.64.

Evolution pays an annual dividend of 12 cents. At the current price level, that’s a yield of about 3.3%.

At the time of this publication, Mark Putrino did not have any positions (either directly or indirectly) in any of the aforementioned securities.

CCIV Stock: What Is the Big Lucid Motors News Coming on March 17?