After a strong day in the markets, stocks turned in a more muted session on Tuesday. Now, let’s see how the rest of the week shakes out while we look at a few top stock trades.

By the way, did you see Rocket Companies (NYSE:RKT) today? I outlined that one yesterday, but wasn’t looking for $42-plus by any stretch — at least, not in a day! 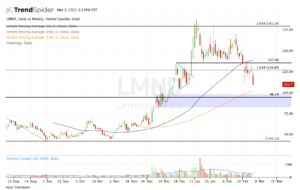 I liked Lemonade (NYSE:LMND) around $50 when it gave us a nice dip. But north of $150 and around $180, it just didn’t make any sense. Anyone who reads this column even semi-regularly knows I’m not a big short seller, but LMND stock was a short in that range.

The valuation was bananas even if the company had the growth rates to justify it — which it didn’t. Breaking to multi-month lows and LMND stock is getting what it deserves (and I mean that without spite. It’s simply overvalued).

LMND stock will probably fetch a bid somewhere in that range, and if the market holds up, likely near the higher end. But look for trend resistance to be selling points, not buying points.

Until the larger trend reverses, this is probably one to avoid for now. 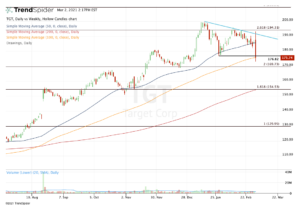 Target’s (NYSE:TGT) initial reaction was bullish to its earnings. Only once the conference call began did investors turn into sellers.

The stock put in its third lower high, as it continues to struggle with the 261.8% extension and downtrend resistance. Worse, the 50-day moving average failed as support.

I’m torn on Target. I really like this one (fundamentally speaking) and it’s been a big winner over the years. That said, the tide seems to be shifting on retailers, particularly those that did well during the pandemic.

Still, it’s hard to be a seller. Shares are bouncing off the 100-day moving average as we speak, as it tests below the January low.

If the stock can reclaim $177, look for a bounce back up to the 50-day moving average. If that scenario plays out, let’s retake Target’s temperature to see how it’s reacting to the 50-day. In short, is it reclaimed or is it resistance?

Should the stock break $169 and close below it, we may need a test of the 200-day moving average. 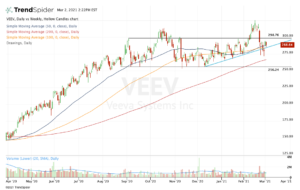 Veeva Systems (NYSE:VEEV) was looking great in February. I posted about it here, as shares gave us a multi-week, multi-month breakout over $298-ish.

The move over $300 sent shares rocketing up to $325, but the market-wide correction weighed heavily on the stock.

On the downside, it’s back in the range. On the plus side, it’s holding the 50-day and 100-day moving averages and uptrend support (blue line). A break of these marks likely puts $274 back in play, a level VEEV stock hit twice last week and which attracted major buyers. 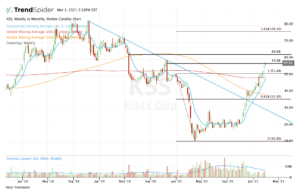 Kohl’s (NYSE:KSS) has been a monster over the last few months, ripping from the $20s into the $50s.

I used a weekly chart, but the thicker black lines represent major daily gaps at $57.26 and $62.68, respectively.

With the latest push, shares have filled the first gap (at $57.26). The latter remains unfilled and will be a level bulls push for should Kohl’s stock continue higher. Above that could put the 2019 high and 161.8% extension in play.

Shares look like they’re struggling with this current area. It may only be a short-term consolidation or it may lead to a pullback. We don’t know yet.

On the date of publication, Bret Kenwell did not have (either directly or indirectly) any positions in any of the securities mentioned in this article.

Air Canada Bounces 32% in a Month: Should You Buy?