Turnaround Tuesday proved to be a real thing yesterday, with markets ripping back after a nasty couple of selling days. The strong breadth we saw then continued today, as the indices continue to march higher. That said, let’s look at a few top stock trades for Thursday. 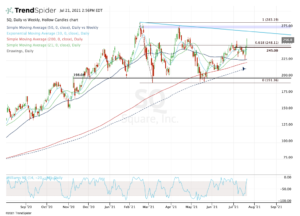 I was going to write about Square (NYSE:SQ) yesterday, but just wanted to give it one more day. With that extra day, shares are exploding higher.

The stock reclaimed its 10-day and 21-day moving averages on Tuesday, and powered through the 61.8% retracement on Wednesday. With the move, we not only saw a weekly-up rotation, but a monthly-up rotation as well.

On the upside, I want to see if Square can rally up to downtrend resistance (blue line). Above that, and perhaps the $275 area is in play, followed by the highs near $283. 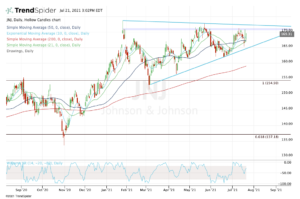 Johnson & Johnson (NYSE:JNJ) looks like it wants to break out, but just can’t find the momentum.

That said, it’s still above all of its major moving averages. Bulls will want to see these measures act as support if we get any post-earnings dips now that the company has already reported.

Below the 50-day moving average, and uptrend support is in play.

On the upside, a move over this month’s high at $171.18 could put the highs in play. Each time the stock runs up to the $172 to $173 area, it has stalled. A move above that zone could finally unlock some real upside in J&J. 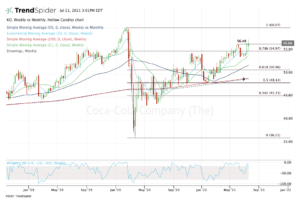 Like J&J, Coca-Cola (NYSE:KO) reported earnings and like J&J, it’s not giving us a whole lot to cheer about. But we’re also not booing, either.

On the downside, keep an eye on the 78.6% retracement and the 10-week moving average. For now, those are the key support levels on the downside. 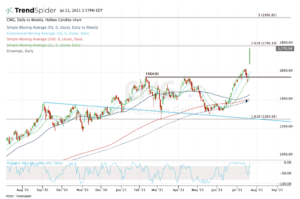 Chipotle Mexican Grill (NYSE:CMG) is roasting to the upside on earnings, hitting new all-time highs in the process.

Shares had finally broken out over the $1,565 level, even though CMG stock flirted with a breakdown back below this mark ahead of earnings. Now gapping higher, though, shares are flying right toward the 261.8% extension.

I would expect $1,800 to act as a profit-taking level, at least in the short term. If it’s not, perhaps the $2,000 level and the three-times range extension are in play. That said, I wouldn’t be in a hurry to short this stock.

On the date of publication, Bret Kenwell did not have (either directly or indirectly) any positions in the securities mentioned in this article. The opinions expressed in this article are those of the writer, subject to the InvestorPlace.com Publishing Guidelines.

What Did the Stock Market Do Today? 3 Big Stories to Catch Up On.

7 Vice Stocks To Buy To Be Cynically Defensive