It was another brutal day for tech stocks and specifically, high-growth stocks on Thursday. And the market is trying to sort out comments from Federal Reserve Chair Jerome Powell, too. That said, let’s look at a few top stock trades in the meantime. 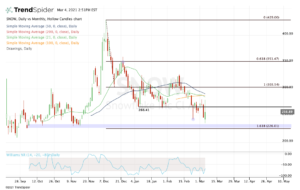 Snowflake (NYSE:SNOW) is up slightly on Thursday after earnings, climbing nearly 13% as one point during the day. Shares have been mixed, taking out the prior day’s high and low before giving us a doji (indecision) candle.

From here, we did see the stock take out last week’s low before quickly reclaiming it. However, it’s still struggling against the $266 level. Let’s give this one some more time.

Below the post-earnings low puts Snowflake in the $225 to $230 area, which has been support so far. Above $266 puts its major moving averages in play, followed by a test of $300 if it can push through those levels. 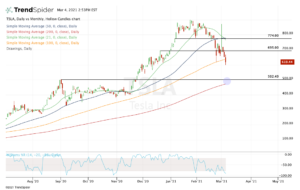 Once the darling of the market, Tesla (NASDAQ:TSLA) stock has been struggling. That’s no real surprise given its meteoric rise — it couldn’t last forever.

At Thursday’s low, the stock was down 33% from the highs. Not that that’s not enough, but a real washout would be best for those looking to buy a deep dip in Tesla.

Specifically, it could put $700-plus in play. 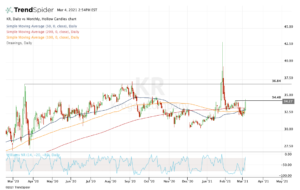 For being a slow-and-steady holding, Kroger (NYSE:KR) has been a volatile mover over the last year. Perking up on earnings, I want to see if Kroger can give bulls a monthly-up rotation.

Again, it’s not really a sexy trade. But now over all of its major moving averages, let’s see if shares can get above and stay above $34.40. Over Thursday’s high, and $36.75 is in play.

On the downside, however, Kroger becomes a lot less attractive on a break of its major moving averages. Below $32.50, and this month’s lows are in play. That’s a “no thanks” for me in that scenario. 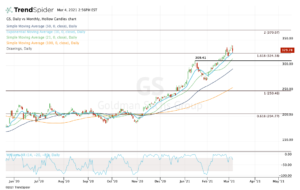 Financials have been the relative strength group to watch amid the latest onslaught of tech selling and violent rotations within the market. Specifically, Goldman Sachs (NYSE:GS) has been one of the winners.

Shares bounced nicely off the 10-day moving average today, although it wasn’t enough to trigger a rotation over the prior day’s high (nor last week’s high).

Below that puts the 50-day moving average on the table.

On the date of publication, Bret Kenwell did not have (either directly or indirectly) any positions in any of the securities mentioned in this article.