Earnings season always leaves victims in its wake. Sometimes there are many, other times there are few. Today’s gallery of stocks to sell focuses on three Nasdaq companies that dared to disappoint during their recent reports.

The post-earnings fallout is unfortunate because all three of them were running hot into the event. It’s another stark reminder that fundamental shocks always trump a good-looking price chart. No matter how bullish the trend appears, companies who fall short of expectations will be punished.

Today’s picks are all prime examples. Their price action has continued to struggle in the days since and they remain vulnerable to further downside – particularly if the recent broad market weakness worsens. With that, let’s reveal the tickers:

After analyzing each chart of these stocks to sell, I’ll provide a bearish trade idea to capitalize. 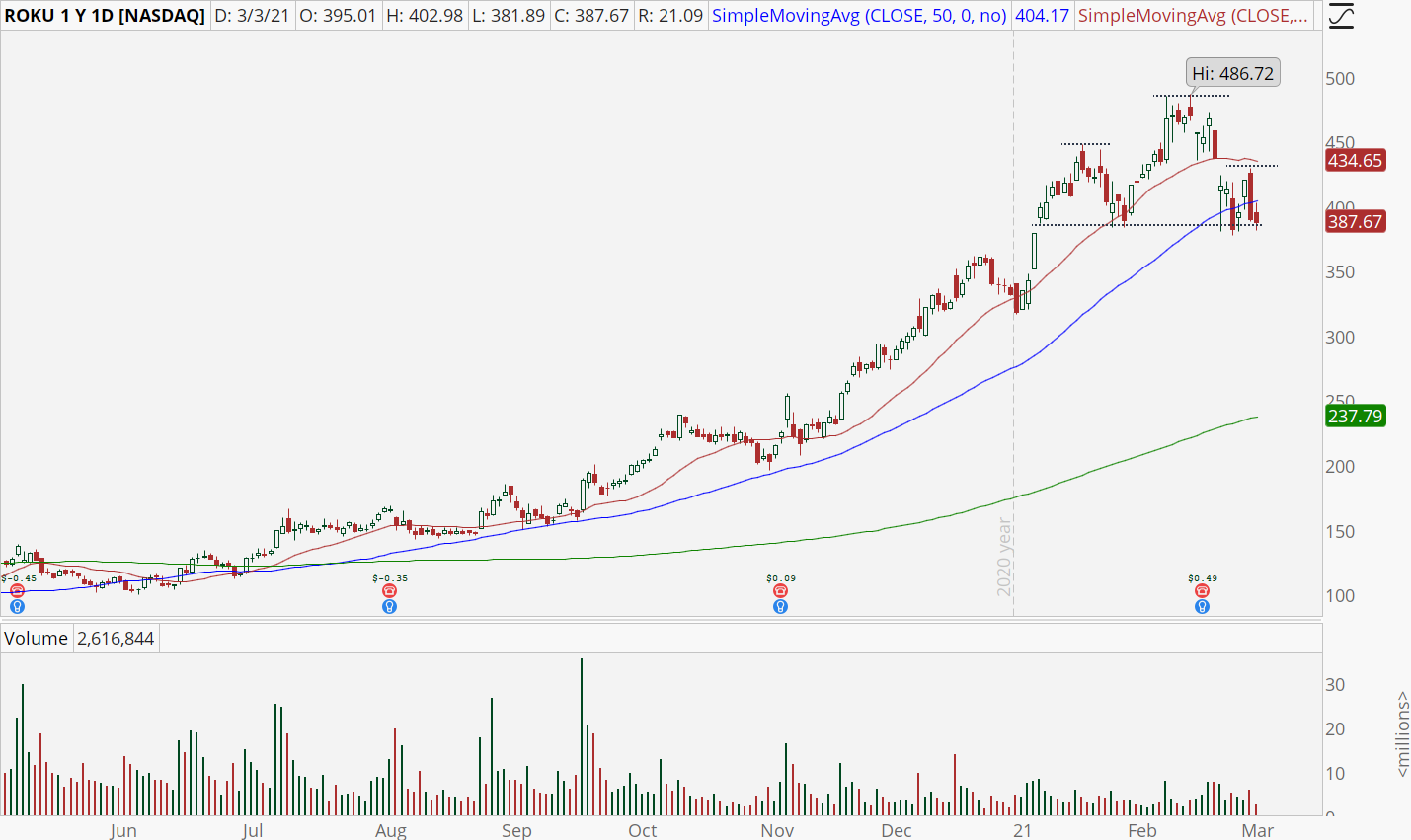 The global pandemic added rocket boosters to Roku’s rise. From the March 2020 low of $58.22 to last month’s peak of $486.72, its share price grew an astronomical 736%. Not bad for one year! The risk with such a rapid climb, however, is that prices outpace earnings. The multiple expansion leaves the stock vulnerable to sharp declines at the first whiff of disappointment.

Such, I believe, is the case with Roku stock right now. February’s earnings were good, but they weren’t good enough to continue fueling its rocket-like climb. Greedy bulls are finally receiving their comeuppance.

Prices are below the 50-day moving average and have now formed a head-and-shoulders reversal. If we crack the neckline near $381 – watch out below! 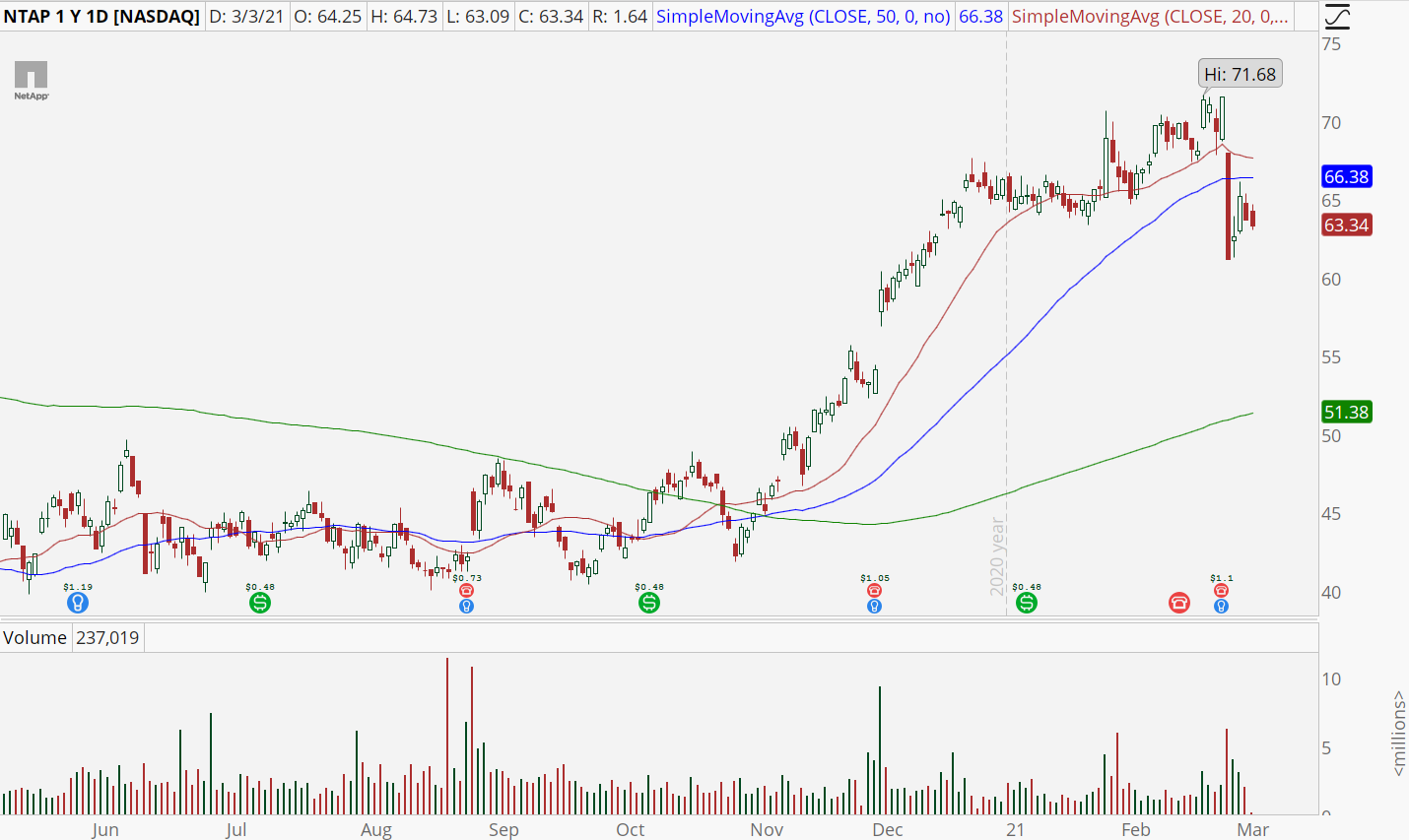 NetApp doesn’t pack as epic a price chart as Roku. Its uptrend isn’t as stratospheric, and its valuations weren’t nearly as stretched. And yet, sellers still slammed the stock after its Feb. 24 report. The selling was unrelenting and delivered a massive day-long sucker punch. Support zones melted along the way, as did the 50-day moving average.

The two-day rebound carried prices back to old support zones, which have now turned into new resistance. Tuesday formed a bearish harami reversal candle to signal the next down-leg was upon us. And, as expected, prices are continuing their decline this morning.

As long as we remain below $66, the path of least resistance is now down. Here’s how to profit. 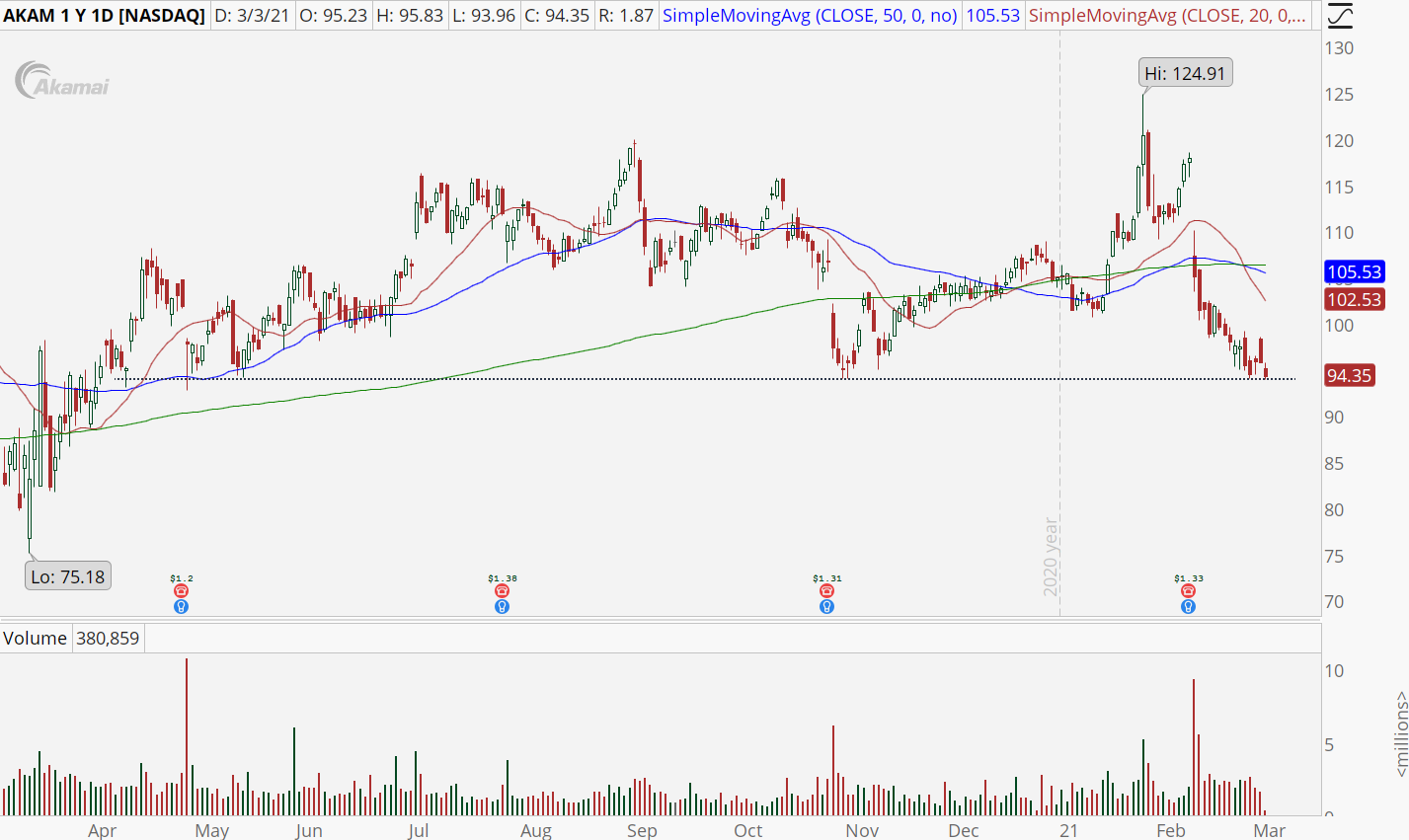 The final of our stocks to sell is Akamai Technologies. And, we may have saved the ugliest for last. For starters, its path has been a hot mess for the past year. Volatility, chop, call it whatever you want – it’s been the opposite of a clean trend.

And then, just when buyers emerge to push it into what could have been a nice uptrend, earnings arrive to deliver the ultimate rug-pull. Since the early-February report, AKAM stock has been sinking like a stone. Tuesday’s gap higher saw immediate rejection, and now we’re on the verge of breaking a major horizontal support zone.

If the floor fails, we could see a fresh wave of selling strike the stock. Throw it all together, and Akamai looks like one of the better bear plays in the market right now.

On the date of publication, Tyler Craig did not have (either directly or indirectly) any positions in the securities mentioned in this article.

For a free trial to the best trading community on the planet and Tyler’s current home, click here!

The post 3 Stocks to Sell After Disappointing Earnings appeared first on InvestorPlace.

Pro-Pot Politicians and a Massive Merger Should Catalyze Aphria Stock