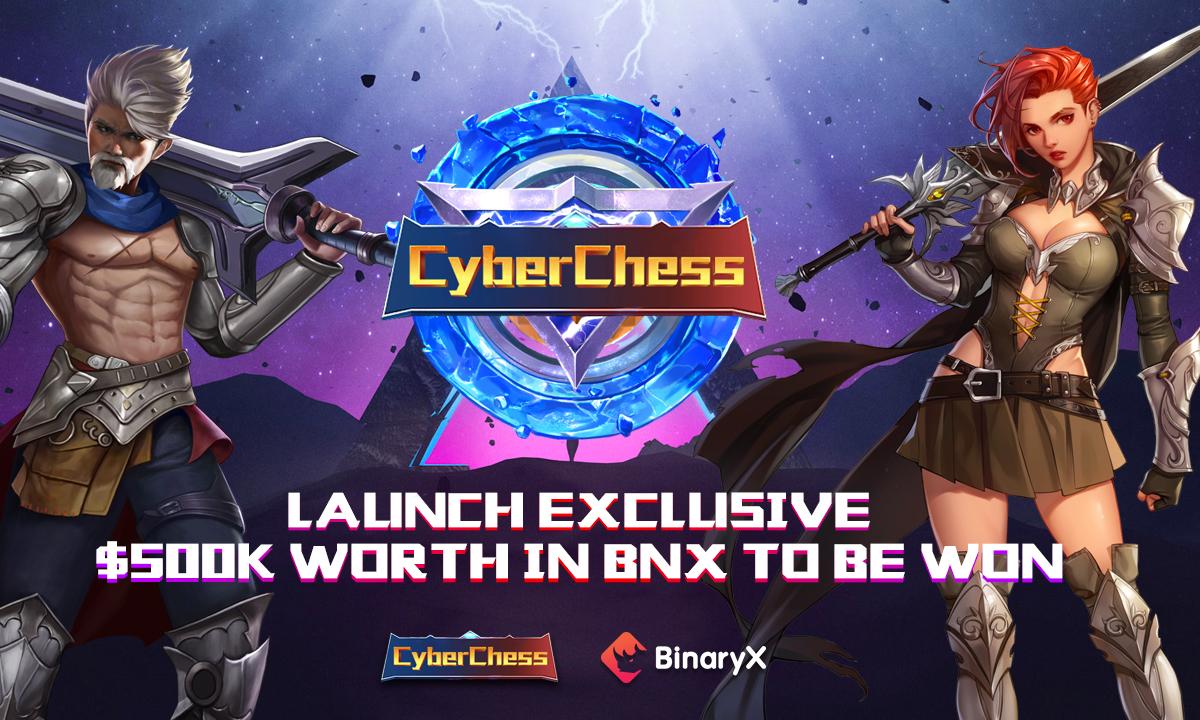 BinaryX, a GameFi development platform, announced today the launch of CyberChess, one of the first free-to-play, play-and-earn auto chess strategy games in the P2E dominant GameFi space. CyberChess offers people on Web3.0 new entry points into the world of GameFi.

$500,000 worth in BNX Prize Pool and Heroes Giveaway for CyberChess Launch

To celebrate the launch, BinaryX will commence Season 1 of Ranked mode battles, where players will stand a chance to win up to $500,000 USD worth of prizes in the first 8 weeks of launch. Over the same period, BNX airdrops will be announced and given away via Discord and Twitter.

To get a headstart, players can also stand to receive additional 2 heroes and 2 skills when they enter the code ‘4morechess‘ under the settings option in the game menu.

As a free-to-play, play-and-earn web3 game, CyberChess differs from most play-to-earn games, and is designed to allow players to start playing the game without having to make an initial investment. When new players connect to the game for the first time, they can summon 5 free heroes and 2 free skills to start participating in matches with other players.

Players can also recharge or make in-game purchases to summon new heroes and acquire new skills. This model lowers the barrier to entry for players new to GameFi and allows players to enjoy the game for its own sake, potentially earning in-game tokens in the process.

As the third game in the Cyber series, CyberChess adds to the utility of BNX as it offers a new avenue for BNX token holders to consume in-game gold.

The gold consumed in CyberChess goes back to funding the development of our games and to support DAO functionalities for community and resource management in the entire ecosystem. BinaryX provides a transparent look into how the funds are being used on their website.

As GameFi continues to mature and evolve as an industry, BinaryX plans to accelerate mass adoption of GameFi by making GameFi games more fun and challenging for players. This includes adding more complicated features and difficulty settings for gamers who want a solid strategy-based gaming experience as well as the earning potential of GameFi.

The gameplay for CyberChess pays tribute to the popular auto chess game format in traditional gaming and is designed to elevate the gaming experience for players in GameFi. Players can participate in two battle modes – Ranked and Arena mode.

In Ranked mode, players get to go head to head in a PvP match to accumulate in-game gold. On the other hand, players battle it out with other players to rise to the top of the leaderboard and take away an attractive prize pool of $BNX in Arena mode.

Read the CyberChess Wiki to learn the gameplay

CyberChess comes with its very own in-game marketplace where players can list in-game assets such as heroes and skills in exchange for gold. This means that players have more avenues to upgrade or accumulate more gold.

‘BinaryX created CyberChess to stand out amongst games in the play-to-earn genre. It comes with a more complex gameplay, which makes the game more challenging and fun for players who enjoy traditional strategy games. We’re excited for our fans to start playing CyberChess and to immerse into the new world we created,’ said Chun S., Global Head of Business Development at BinaryX.

Earlier this year, BinaryX announced its first IGO partnership. With the launch of CyberChess, BinaryX is poised to roll out its ambitious plans to serve as both a GameFi developer and IGO platform.

‘The goal is to be a home ground for gamers, developers and investors to access and interact with GameFi. We aim to be the frontrunner in the space and we have a ton of exciting IGO projects coming up. Launching our IGO platform is the next step,’ Chun said.

BinaryX is the GameFi platform behind the play-to-earn (P2E) games CyberDragon and CyberArena, both of which run on the BNB chain.

BinaryX began as a decentralised derivative trading system. Recognising the burgeoning popularity of GameFi and interest in the metaverse games, the team gradually evolved into developing decentralised video games, and is now transitioning to becoming a GameFi platform offering IGO services to bridge Web2 developers to Web3.

As one of the top 10 projects on the BNB Chain, BinaryX has more than 100k coin holders and 15K monthly active wallets. It is also one of the largest metaverse projects by trading volume on the BNB chain, with more than 300 million in market cap. BinaryX has a token, $BNX, that has consistently demonstrated strong performance despite the bear market.

For more details and information about BinaryX, please visit www.binaryx.pro