USD/JPY dropped 200 pips from its highs as technical and fundamental traders bet on the yen’s rise. A bearish divergence with the RSI coupled with a rising wedge pattern weigh on the pair.

One of the most impressive rallies in 2021 happened in the JPY pairs. All of them rallied all year and ended the year at their highs.

Because the US dollar is the world’s reserve currency, the USD/JPY pair is the one closely watched by JPY traders. If you want, it leads the price action in other JPY pairs.

It recently traded as high as 116.30 area, but now it is down sharply. Both technical and fundamental traders have a reason to sell this market.

On the one hand, technical traders closely monitor the developments as two bearish patterns suggest a sharp reversal. First, a bearish divergence with the RSI. Second, a rising wedge pattern.

On the other hand, fundamental traders interpret the recent Bank of Japan’s statements as hawkish on the yen. Inflation is seen rising in Japan, and a weaker currency would hurt the economy, warned the central bank. 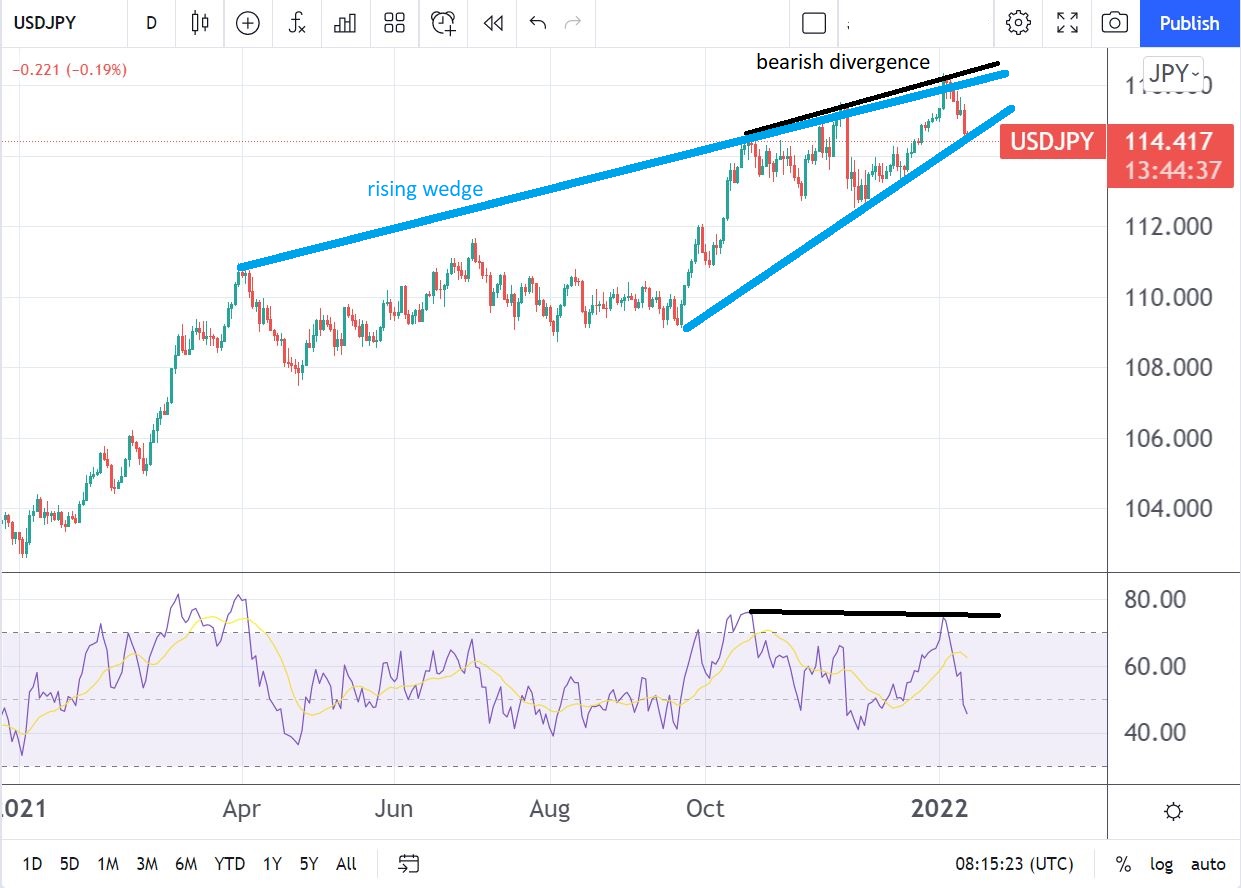 Bearish divergence with the RSI

A divergence appears when the price action diverges from what an oscillator shows. Most divergences involve at least one oscillator, and the chart above shows the Relative Strength Index or the RSI at the bottom.

While the USD/JPY pair made two higher highs recently, the RSI does not confirm the second one. Hence, a bearish divergence formed, warning bulls that the rally may stall.

Another bearish pattern visible on the same chart is a rising wedge. Wedges are rising or falling, bearish or bullish.

This one is bearish, and the focus now shifts on the lower edge of the pattern. A daily close below implies more weakness ahead.

Bank of Japan increasingly worried about the yen’s weakness

Finally, fundamentals also favor a stronger yen. At the end of last year, the Bank of Japan has warned that a weak JPY may hurt households’ income through price rises.

The Bank of Japan has been one of the most aggressive in easing the monetary policy well before the COVID-19 pandemic has gripped the world’s economy. It closely monitors the yen’s evolution and, when it speaks, investors listen.

The post Is it safe to sell USD/JPY after dropping 200 pips from its highs? appeared first on Vantage Point Trading.